I have to keep reminding myself that the value of my horse and my riding isn't the number I get at a horse show. 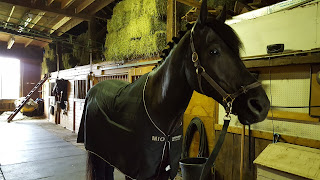 Went to my first rated show in a year.  We've worked our butts off, overhauled the way we go, and been well rewarded at the schooling shows.  I know schooling show scores are higher, but when you're consistently upper 60's, you feel ready to go out with the big kids.  Not win, but not look ridiculous.

It was a facility neither of us knew.  I was pleased to see that we would have one test in the indoor, one test in the outdoor.  We need the practice in new rings and indoors aren't something we see a lot of at rated shows.  The indoor ring had an indoor warmup, so he was mentally set on the idea of being in an indoor and he was used to the lighting.  He warmed up very well, nice and relaxed once he'd had a good look around.  I was first after the lunch break.  We went in as soon as they would let us, while the judge was still getting settled.

It was a very big indoor with two judge stands covered with flowers.  Theo stopped dead to stare at the judge, but walked by with minimal fuss.  He also stopped to stare at the empty judge stand on the side and I had to carefully tip toe him by so we could make it to A.  She rang the bell pretty quickly, so Theo didn't see much of the ring before centerline.

He was brave, I will give him that, but with so much to look at?  Wicked behind my leg and would suck back every time we were heading toward A.  The spectators were still getting settled, dropping things, going up the stairs to the observation area, etc.  He started to scoot at one point but came back so quickly I didn't even get a knock from the judge.  I did, however, get a knock on every movement for him being sucked back and distracted.  By the end of the test I was kicking like a Pony Clubber to make him canter toward the spectators.  Lengthens?  Not so much.  One was more of a loop because he was trying to step away from the empty judge's booth, the other got slower as we got closer to the moving people on the stairs.

It was survival mode, pure and simple.  I smiled at the end because he never spun, bucked, or quit on me.  It just wasn't the test we can do and I knew our score was going to suck.  I sat by the trailer with Theo between tests, eating a snack bar and trying to not be upset.  He was so, so much better than he would have been in the past.  It just wasn't good enough.

My second test was in an outdoor, far from the warm up area, with a storm blowing in.  Yeah, you can imagine how this went.  My slightly grumpy pony was giving me hints that he was thinking about being rude.  I picked him up instead of having him walking around on the buckle to make sure he didn't spin as the other horse left.  I didn't have to kick and I felt like the test was better.  He was tense and rather bug eyed, but I wasn't having to boot him around and he wasn't sucking back at one end of the ring.  He did give me one head shake and come off the rail at the end of his walk, but that was very brief.  I was actually very, very proud of him.  Out there alone in high winds and he was very honest.

My first test score arrived after I was done with my second test.  I got a 60.000%.  I thought that was very fair for a distracted, behind the leg, but successful test.  I was 7th out of 9, right where I thought to be.  He was seen as a capable but distracted horse that needed more impulsion.

My second test arrived with a yellow ribbon on it and I got excited.  3rd out of 7?  That has to be better than a 60%!  Nope.  57.6%.  Only one person in First 2 got higher than a 60.  The judge was quite sharp.  My figures were not accurate enough and my horse was hollow in the back and behind my leg.

I forgot how different it is to ride for S judges.  They see everything.  I'll admit to feeling utterly defeated, sitting in my truck looking at those two tests.  I even thought about scratching my next show because what's the point?  I've been working for a year and got nothing.  Worse than nothing, I went down on my First 2 test.

But I spent my two hour drive back trying to remember the positives.  Theo did not spin, buck, bolt, or otherwise try to quit on me the entire day.  He marched into two very scary rings on his own without anyone clutching their pearls or gasping.  My First 3 test was bad.  I'm the first to say it, it was BAD.  It was not at all the test I practiced or wanted.  We still got a 60% from an S judge.

I really think my first judge saw a distracted, slightly fearful horse and judged us through that lens.  She saw him freeze twice on our way around the ring, she knew he was overwhelmed.  We were tense and had zero forward, but he was with me and was reasonably relaxed by the end of the test.  We squeaked out a 60%.

The second judge didn't see him freeze up or spook, I had already picked him up and didn't let him get a good look around.  She saw our test through a different lens.  She saw a tense horse with a hollow back and a rider that couldn't hit her figures.  She didn't know that my horse was trying to step away from the things he swore he could hear in the trees, she saw a too big circle and hit us with a 4.  We got hit with a 57% which still seems harsh for a First level test where we completed every movement easily, but I can't disagree with any of the comments.  He was tense, his back was dropped, and some of my movements were late due to my pony being distracted and not responding promptly.  My scores were tough, but I can't argue with them.  I really, really want to, but I can't in good conscience.

Which leaves me utterly disheartened.  I worked so, so hard.  We didn't get to show a bit of it off.

Now we get to spend two weeks practicing riding a test with distractions.  Because if I can't fix this, we'll never be able to move up.  It's not about movements or impulsion or any of that anymore.  It's about him understanding that he needs to go forward into the test and not suck back while fighting my hand so he can pick up his head and stare.  None of that looks good in a dressage test.  We've gotten his adaptation time down to a few minutes, but that's still too long.  We're pretty much through the test by that point.