I try not to anthropomorphize too much.  Yes, it's fun to suggest my horse is plotting, sits in his field and contemplates ways to wreck his blanket, plans his days around impressing the mares in the next field, but I know none of that is true.  Theo thinks about food, water, rolling, and the safety that comes with the herd.  If it's not in front of him, he's not thinking about it.

But once something is in front of him?  It's real and he reacts to it.  He's an emotional creature and has a lot of feelings about stuff.  When I come out of the barn to walk to his field and he whinnies a greeting to me, I know he's greeting a returning herdmate.  He turns and trots up to the gate because he knows my arrival brings lots of grooming and cookies and other things that make him feel good.  His body language with me is animated and interactive.  He's very 'talkative' for a horse.  He wants grooming, he wants to play, he wants a cookie.  Yes, there's a fair bit of nipping attempts, but it's the communication kind. 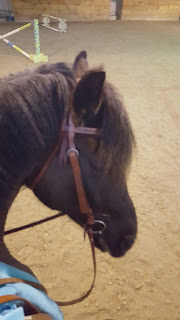 I went to get him the other day and I saw the way he pranced up to the gate.  His pupils were dilated, his ears pricked.  He was very excited.  I put him in the cross ties and he proceeded to show me where he was most itchy and needed a long curry session.  We went down to the ring and put in a solid schooling session in the western gear (my first ride where I felt comfortable enough in the western gear to put in a serious school).  Someone that only recently met Theo mentioned how different he looks for me.  I laughed and said 'well, yeah, I have spurs'.  And she said no, he just looked so much more engaged.  When I talk, his ears flick.  He doesn't ignore me.  Apparently, he doesn't do that for his other riders.

I think my horse loves me.  It's such a human word and concept that I hate to use it when talking about horses, but it really is the best word for it.  There's plenty of research to show that horses have a chemical reaction in their brains when they see certain people.  He definitely reacts to my presence in a positive way and seeks me out for company.  He treats me the same way he would a close herdmate.

Theo and I have been working together for almost exactly three years.  We're going into our fourth show season together.  We've hit the point where I can feel his breathing change before he spooks, giving me time to head it off.  He can feel my weight shift and knows that I'm about to ask for something.  I know when he's hit his limit and needs to stretch and relax.  He knows when I've hit my limit and that he should really quit giving me a hard time.  I take a deep breath, he echoes me. 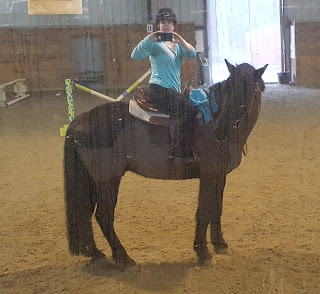 I was watching him teach someone else how to jump in a group lesson.  Another horse was having a flail and I automatically said 'whoa' in that odd, two tone way I do when lunging a horse.  Theo stopped dead on the other side of the ring, completely confusing his rider.  Seems he'd been watching me the entire time.  I've learned that I can't cluck, say whoa, or say his name when someone else is on him.  He assumes anything I say is for him.

Despite all of my efforts, I think Theo is really a one person horse and I'm his person.  Yes, he is ridden by others and does a good job with them.  He's different with me.  Trainer A still finds his rides challenging as he's just as likely to flip her the bird as he is to cooperate.  It has to be frustrating for her when I ask for the same thing and he'll at least give it a try.  He wants to do it for me.

He's not an easy horse to love.  He bites a lot, has temper tantrums, hates all of his blankets, spooks, strikes, is lazy, gets way 'over excited' about things, and is in general a nuisance.  He thinks he's a stallion and acts studdish enough that my vet thought testing his testosterone levels was totally logical (I didn't do it, too expensive).  But he's also a total sweetheart that loves to cuddle and soaks up any positive reinforcement.  He hates to be wrong.  He loves to be powerful and to be free to act on that. 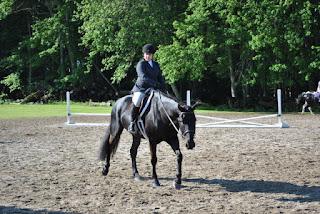 I deal with the nipping, the threats to kick, the random dives out the left shoulder and bucking.  He deals with my locked up left hip, busy hands, delusions of grandeur in the form of trips to shows, and erratic schedule.  It's wonderful that we stumbled into each others lives.  We're both kind of crabby, opinionated, and distrustful of strangers.  Neither of us are easy to live with (ask my hubby).  But we're complimentary shades of crazy and that's all that matters.
Posted by Catie at 1:12 PM