The media I was promised never materialized, so I'm giving up and posting a wall of text.  Enjoy! 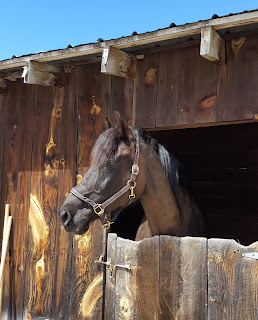 Day two dawned warmer but still darn windy.  My body ached.  I had to get up early to take care of my beast.  It’s been awhile since I had to go muck and feed.  It took a lot of coffee to get me moving and willing to deal with the day.

I promptly threw Theo in the round pen.  He could be outside with some hay and water for the lecture part of the day.  The instructor went over how horses see the world and how their vision differs from ours while Theo trotted, rolled, snorted, and generally acted a fool for most of the morning.  A lot of the lecture focused on how the differences in light perception, color, and depth perception affected the way horses see the world.  What seems clear to me might be a confusing blur to my horse.  I do have to disagree with the old theory that horses don’t transfer visual information to both halves of the brain (proven through experimentation to not be true), but for the sake of the clinic’s goals, most of the material was a helpful reminder.

Then, because Theo was already in the round pen, he was used by the instructor as a demo for how horses perceive things and how it makes them move.  I got a reminder of where my ground work is supposed to be.  No more ignoring the little dragging, the stepping in front of me, the wandering feet.  If I want him to listen when I'm in the saddle, he must listen on the ground.  I've been slacking.  There's no reason he can't stand like I see with the western broke horses.  I just haven't told him to.  It took the instructor about five minutes to impress upon my horse that he was not to move unless given permission using nothing more than some pressure, specific body language, and a couple of corrections.  Huh.

We went back into the ring and Theo was suitably chill.  Good thing, since he was right back into formation work.  He would occasionally pop his butt and curl, but we were paired with the instructor on someone's horse and he really, really didn't care about Theo's display.  His motto is 'torturing the inferior equine species', closely followed by 'I love it when they hate it'.  The more Theo hated it, the tighter things got.  I was less amused as I was the one sitting on the temper tantrum, but the temper tantrum dwindled as time passed and he realized it was a lot of work for no gain.  Also, I was too busy staying in place in the formation to give his theatrics attention.  Coincidence?  Not a chance.  As his assistant said 'I think you've finally got his number'.

Obstacles started out easily enough.  Plywood on the ground?  Theo didn't even flick an ear.  Bridge?  Pool noodles?  Ha, we've done that a million times.  Then the instructor busted out the smoke bomb.  It's one of those signaling things you use on a life raft.  A big cloud of orange smoke hissing out of a little can.  Several of them made a big pop when started.  Theo was freaking not having it.  We learned about keeping the feet moving and never ever letting them turn away.  They can circle and stare, but they have to keep moving and they have to keep looking.  You slowly spiral in as they figure out that they're still alive.  After a can or two, Theo decided that it wasn't going to actually kill him.  Each new can would make him skitter to the side again, but each skitter was less violent.  He sneezed and shook his head each time he stepped into the smoke, but it was more disgruntled protest than full on flight response.

The squad car with the siren was a bit of pleasant surprise.  Theo stood his ground even when the other horses jumped and shied back.  He could see it, he could understand it.  He watched it very intensely, but walked up to it with minimal fuss.  By this point, I'd had loose reins pounded into my thick skull.  If your horse is thinking about stopping or flying back, don't give them any kind of excuse.  No pressure from two reins ever when working through a spooky thing.  One rein only and ideally, none.  I sat with loops in my reins while that squad car approached and Theo stood like a statue.  So long as I acted like nothing was wrong, he would stay dialed down.  I was very proud of us both and started to think we had this figured out.  Then the instructor busted out the gasoline can.

Fun fact, I don't like fire.  Theo had been leaning on my confidence all day.  The clinic was as much about desensitizing the riders as the horses.  He poured the gasoline in a line in the sand and lit it.  The horses scattered like leaves.  I learned that it's the movement of fire that gets them.  It's low, it's moving, and they don't understand it.  They see unstable ground and don't want to put their feet near it.  The wall of smoke really doesn’t help.  We started working in a big circle around it, slowly spiraling in.  Our barrel racer just shrugged and marched over it.  Thank you, thank you RB.  He was the lead horse through the smoke and the fire because it didn't bother him at all.  Theo was braver than average, but couldn't cope with going forward when the rest of the herd was spooking back.  If I put his nose on RB's tail, he could cope.  Once Theo was coping, another horse got on his tail and we made a little train.  The transition from cluster of spooking horses to train occurred several times with one of the brave horses in the lead.  Theo even got to lead when working the siren.

I threatened to steal RB and stick him in my trailer.  Cutie patootie QH that thinks smoke and fire is boring?  Gimme.  She never left her horse unattended after that . . .

I came into this expecting to desensitize my horse to things like blowing tarps and stepping on weird things.  I didn't realize I'd also be desensitizing him to being in a ring full of amped up horses that are running into each other.  By the end of day two, the QH mare blundered into him and he let it go.  He'd been crowded and touched so much that it wasn't a big deal anymore.  He had no choice but to cope.  He marched around with a horse close enough to touch his tail and I barely noticed we'd picked up a friend.

Let's all be clear, at no point did this get easy.  There was a lot of him stopping dead and then trying to spin away from things.  Many of the obstacles took multiple attempts once the sensory things were added (sound/smoke/fire).  He did not like the fire.  When perpendicular to it, I could trot him over because he read it as a jump.  Going next to it?  NOPE.  Stepping over an obstacle with fire around it?  DOUBLE NOPE.  When I finally got him over it, it was with wide eyes and much snorting and rushing.  There was very little chill going on.  When I put him to bed, we were both looking shell shocked.  And there was still another day to go.

I collapsed as soon as I got home and slept like the dead.  I dreamed of horses spinning and police sirens.  It was almost worse knowing exactly what we would be facing on the third day and how averse my horse was to the idea.  But I also had my first inklings of hope.  I’d already sat everything my horse had to dish out.  Theo had already marched over things that were once deemed impossible.  Constant repetition was starting to give him the idea that he should go forward when I squeeze because I know what I’m doing and he would be fine.