Hey there, intertubes.  We exist still. 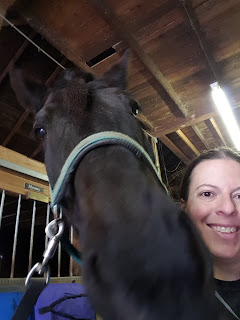 And we still can't selfie.  No, Theo, don't eat my phone.

Work has been an exercise is chaos trying to pass for organization.  Boss is gone, no new boss in sight, reporting up to an exec that is way too busy to lead a team of 8.  The running joke on the team is that I'm in charge because I'm the crankiest and seem to know what's going on with everything.  Yay?  But there's a light at the end of the tunnel.  I found out that there is a restructure coming and that there's a promotion in it for me and a really, REALLY cool opportunity.  Like a once in a career opportunity.

But they can't announce or make anything official until the end of March, so I'm holding down the fort at the office, just trying to keep the place from completely igniting.  And then I go see my pony. 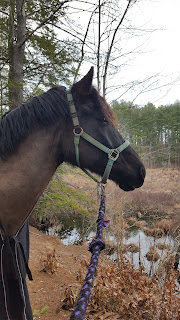 He is so good looking when he's spooking at ducks fighting over nesting locations.

We are still soldiering along.  I ride three times a week on average.  Trainer A hops on once a week.  He has a new adult ammy friend to teach that rides him twice a week in lessons, one jumping and one flat.  She thinks he's fancy and safe and very cool.  I agree.  She's learning to jump with confidence which is amazing since she used to break out in a cold sweat when faced with a cross rail.  With mi papi, she grabs mane and smiles as he handles the rest.  He doesn't bolt, rush, or refuse.  Ever.  He's successfully earned the title of school master and has earned the respect that goes with it.  Never, ever will he do rank beginners again.  Lucky teens and some very lucky adults that w/t/c and jump. 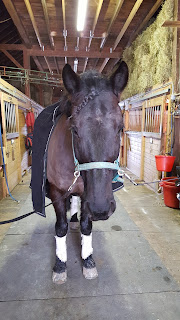 I'm schooling Second, jumping, and still trying to figure out my western saddle.  We sneak out for trail rides when the conditions are cooperative, but that's not often.  Poor papi is getting ring sour.  It's not bad, but he's definitely bored of the indoor.  On the other hand, he's so eager to move his body that I've been getting some really nice work.  He's finally strong enough in front of his withers that he can lift through there without it being an occasion to get frantic.  I need to school outside where I've got the room to really turn on the afterburners, but no dice.  Another foot of snow in the forecast this week.  But at least we got out a little bit. 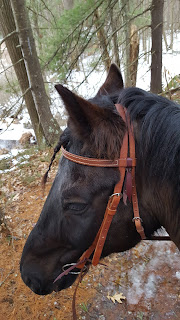 I hate mud season.  Theo revels in it. 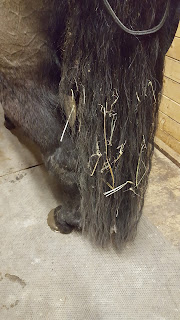 Good gravy, papi.  Keep this image in mind any time you feel envious of the tail.  This is a daily occurrence that must be maintained.

The current plan is for me to take advantage of the dropping stress levels and step up Theo's work as the temps rise.  April 7 I have a ride review ride with a trainer/judge that I really respect.  It will be a great chance to get off the property and do a run through of that Second 1 test.  And if we totally blow it?  Eh, it's a ride review ride, it's fine.   First schooling show is April 22 and, assuming we don't fall on our face on the 7th, we'll be doing Second 1.  No plans to do rated shows this year outside of some Western Dressage outings.  I want to focus on us being able to go in the ring without theatrics.  I might do the UNH show in June if things are going well since it's close by and he likes those rings.

I've also got my road races scheduled out through June, so need to make sure I leave time for that stuff, too. 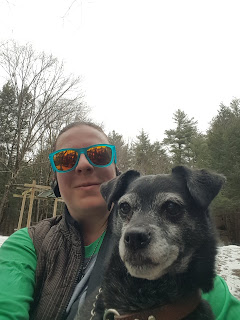 The chug thinks I need to run more.  My knees disagree.  But I'm up to 5 miles for my weekly long run and my cardio is better than ever.  It really does make a difference in so many ways.  I spent a couple hours doing spring cleaning for the chickens yesterday and I was muscle tired, but not exhausted or out of breath.  My heart rate stayed in the 120 range for my jumping lesson yesterday (used to be more like 150). 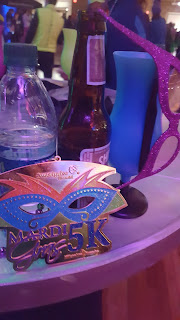 And they give me stuff at races.  Like beer and medals.

So we're doing well.  Theo is fat and sassy.  He's getting his alfalfa back finally.  He had it taken away for a bit after his explosive December and two weeks off in January, but it's time to start turning the dial up.  I'm working hard on my sitting trot and my transitions within the gaits.  Theo's learning that he can sit without getting tense about it.  The days are longer, the snow is melting, and my show schedule is shaping up.

Work is still hell, but pony life goes on.
Posted by Catie at 7:49 AM