Who's a good boy

First things first.  For those that replied to my quandry about a second trainer, I girded my loins and talked to Trainer A about going away to camp.  Her response was a cheerful 'hey, if it's not during summer camp, I'll go with you!  Or you can borrow the trailer if I can't make it'.  So I stressed myself over nothing, you guys were right.

Secondly, background check completed and official start date is set.  I have a new job!  I'm so excited and relieved.  It's everything I could have hoped for as a horse mom.  I won't be doing my 3pm on Tuesday lesson any more, at least not for the first month, but in every other way it's what I need to keep my Bronze Medal dreams alive.  Out the office door at 4pm, at the barn by 4:20pm, in the saddle before 5pm?  Yes, yes that works.  So the ulcer is subsiding and Theo is relieved that the alien is leaving until the next time life starts to get a bit too real for me.

And third . . . ly?  Don't think that's a word.  But third, my horse is freaking amazing.  How did anyone ever think this horse was a jerk?  I mean, he still tries to bite people on the cross ties before you ride him, but it's mostly excess energy and the spring yayas.  Once I'm in the saddle?  It's all good. 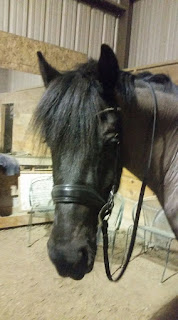 Trainer A revealed that she's really been enjoying her rides on him lately.  Moment of honesty:  Trainer A didn't enjoy her training rides on Theo to start.  Mi papi doesn't work for other people the way he works for me, everyone knows that.  When I ask, he'll at least give me a try.  It might not be a lot of try, but he'll give it a whirl.  Most of the time he'll give me a solid effort just because I'm the one asking.  Trainer A used to spend 15 - 20 minutes of her ride convincing him that it will be easier for everyone if he just cooperates.  As she put it, she's not his mom and he has no real interest in making her happy.  But the times, they are a changing.  The months of working together are adding up and they're working out a compromise all their own.  She can now get on and warm up as opposed to convincing him that work will not actually kill him.

He's also been a bit of a rocket lately.  In a good way.  Spring is in the air and he's feeling it.  He really hates being cold.  Now he's in a turn out sheet most of the time and he's very happy.  When I call him up out of his field, he now canters up to the gate instead of moseying.  Or does a bolt-ish gallop like he did today.  I put the chain over his nose and walk very briskly down the road because I want to keep his attention.  He arches his neck and struts along.  He fidgets and fusses on the cross ties a bit, but a quick tap with the dressage whip will remind him of his manners.  He marches down to the ring, his overall attitude positive and a little impatient.  He genuinely enjoys heading down to work now.  He dozes during his post ride groom, all of his fidgets and fussing gone.

That doesn't mean we're ready to start showing.  Far from it.  The outdoor ring is still under snow, so run throughs of my test are a bit challenging in the small indoor.  I'm going to be doing First 2 and 3.  Yay, leg yields.  While mi papi has made big steps forward in carrying himself correctly (aka not bracing through the underside of his neck in order to utterly ignore the bit), I have good reason to believe that he'll forget large parts of his progress once we're away from home.

Easter weekend will be my weekend of freedom between jobs, so I may squeak in some extra lessons.  I quit one job on the 12th and start the other on the 17th.  I'd hate to start the 2017 season by flopping around the ring like a stranded fish while my horse demonstrates his impression of a porpoise.  Might need a mini boot camp to prevent that.