Between Theo's changing work levels and the discovery that he has a touchy tummy, his food continues to be modified.  He moved over to Carbguard without a hitch and after his pop rocks, he's been happily hoovering everything in sight without trying to kick me in the knee when I brush his belly.  But the protein still wasn't where I wanted it, particularly when he's being asked to develop a lot of new muscle.  So what to do?  Bump up the grain again, use supps, change grain type?

I updated my grain tool to include calories to keep me in check.  Mi papi is a bit of an air fern.  This is where we started when I bought Theo:

A horse in moderate work is supposed to get about 25,000 calories, so he was a bit light on calories as well as fat and protein.  Especially high quality protein.  I put him on the Carbguard, which got us here: 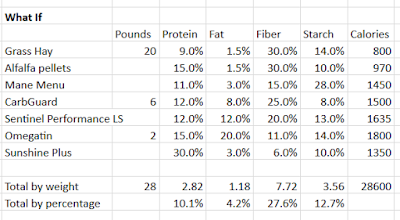 6,000 more calories per day?!  I'd never get his saddle on him!  Assuming he didn't lose his pony mind.  Let's try another option: 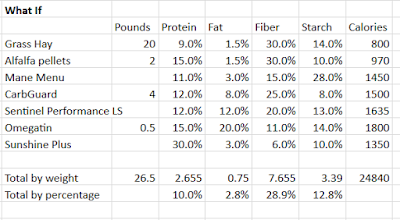 This is the option I went with.  I've added two pounds of alfalfa to Theo's diet to up his protein while acting as a buffer for his delicate tummy.  He'll get one pound of alfalfa pellets with each grain feeding.  Since he's also getting 20 pounds of grass hay, I'm not worried about throwing things too far out of balance.  It also keeps his fiber up.  I like slow burn fuel.

He's currently only getting a half pound of alfalfa per feeding but now that I'm back in full time work, we'll add the other half.  So far, no problems.  He's happy, he's eating, and I'm spending less time kicking.  I haven't noticed any significant change in the way his girth fits, so the change in calories seems to be small enough to be managed with work.  He's up 2,140 calories a day compared to last year when I bought him, but his work load is up quite a bit as well.  Dressage-ing is hard work!

If he starts getting chubby, we'll be reducing the Carbguard and dropping the Omegatin while replacing it with Sunshine pellets to get the most bang for the caloric buck.  Using Sunshine pellets, I can dial his calories all the way down to what he was getting last year while keeping his protein at 10.6%, though it does swing his starch up and his fat down.  Hopefully I can keep him where he's at.  He's shiny, happy, and not begrudging me the work I'm asking for.  Much.