Poor Theo.  No one warned him that being bought by an adult amateur would end up like this.  It's a wild whirly gig of random things.  He never knows what's going to happen once the brushing and fawning over him part of the visit is over.  What tack will it be?  Where are we going?  What insane request will she have for me now? 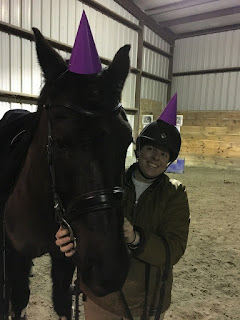 First I decided I needed to jump without reins or stirrups.  Theo went along with that and had the patience of a saint, as I mentioned in my last post.  After that ride, I figured he'd earned a day off and I took another step toward my winter goal of teaching Theo to go bridleless. 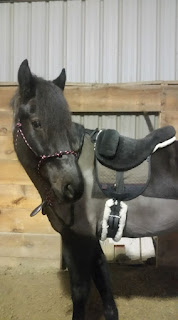 And there's my pretty pink rope halter.  It fit like a charm!  Just a little adjustment under his nose to tighten up the noseband (his face is actually a little bit delicate for an oversize fit) and we were good to go.  That's my PS of Sweden lead rope attached to the halter.  I got it with his show halter and the end is a leather loop to attach the snap.  I undid the loop, pulled off the snap, and relooped it on his rope halter.  Done!  And long enough to be looped around and act as very primitive reins.

It's a good thing Theo and I have worked on neck reining since steering with no bit or proper side pull is a bit tricky.  But with a bit of work, we were trotting and cantering around in a perfectly sane and controlled manner.  We made some students laugh by trying to get through cones set at pony sizes.  Theo's legs were just too long.  Once he had the idea, we were neck reining along like old pros.  He has some western trail horse in his background, I may not be the first person to hop on bareback with a rope halter.  I'll have to get video, my precious dressage horse jogging along in a rope halter.

Before everyone thinks I've quit dressage and will now be a bridleless, natural horsemanship hunter rider, we did the dressage thing, too. 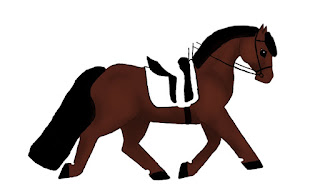 Keeping papi from getting ring sour with all of this variety means that when I get on with a real saddle, my spurs, and some intent, he's more likely to pick up and show off.  He had some energy to burn on Thursday so I threw my tack on him to burn it off in a positive way.  He put on quite a show, stretching and snorting.  As Trainer A put it, he looks good with some extra energy.  Alfalfa is a wonderful thing.  Now to find the balance point between feeling that regularly and not getting unloaded.

So in one week, Theo did two serious dressage schools, two jumping lessons, two goofball rides, and one day off.  He seriously has no idea what we're going to do when I tack him up.  We may be working on his lengthen trot (still sucks) or we may be playing soccer.  He now has three completely different outfits for me to pick from and I can't help but think how fantastic he'd look in western gear.

Identity complex.  I'm giving him one.