Theo and I got our first clinic of 2017 today.  Yay!  We had another round of winter weather, but I have the Behemoth and a couple inches of snow wasn't going to stop me from attending my bomb proofing clinic.

Today was a ground work lesson.  Not a surprise, only a fool takes a group of horses they don't know, in winter, and puts riders on them before throwing random things out.  Today she handed out rope halters and we worked on respect and attention.

It was really weird seeing my dressage pony in a rope halter.  I've used them before, but not with him.  I brought him down in a bridle since I couldn't find my chain shank, but rope halter worked better for the plan of the day.  And it was interesting.  The trainer is a Montana born and bred trainer that uses national horsemanship.  She's very big on manners on the ground.  Her first impression of Theo was me trying to pry my dressage whip out of his mouth.  Hahahahaha, I swear he's not a rude spoiled brat with no respect.  Honestly!

We worked on disengaging the hind legs.  The good news was that I've done this with Theo a million times and he was happy to turn like a top without me even touching him.  Then we started lunging a bit, making him change direction back and forth on the circle.  Poor papi, he was so confused by the change in direction.  As a school horse lunge pony, never changing directions on the lunge is a rule.  But once he figured it out, he was a gold star student.  The trainer had little to say about him since he just went to work, energy levels chill and chewing away.  He's very in tune with me and once he knew the game, he'd change direction off of a hand gesture.

As for the actual bomb proofing?  Theo was a riot.  He put everything in his mouth.  Walk over the tarp?  Grab it on the way over.  Walk over grain bags?  Pick it up and carry it back to mom.  Investigate a roping steer?  Try to take a chunk out of the wood frame.  He just didn't care, and since he wasn't getting a reward for just investigating (old hat for him), he decided to offer something more.  I can't argue with his courage and brains when he decides that the next step after touching the scary thing is to pick it up and bring it back. 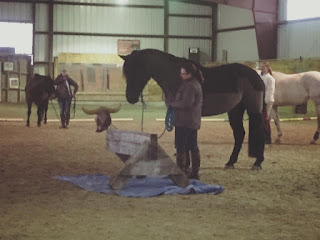 Soccer ball?  Nothing.  Banging corrugated metal?  Nothing.  A little bit of a look since it was a strange sound, but he immediately reached out to check them out.  Theo already appeared to be respectful and bombproof, even standing ground tied while I swapped out blankets in the 17* weather.

But funny thing about experienced trainers.  They know how to spot a weakness.  I startled at the corrugated metal sound, so Theo eyed it.  The trainer noticed.  So at the end, while talking about the different horses, she made an example of Theo.  We were done, Theo was dozing, I wasn't paying much attention.  She went behind us, continuing to talk, and then slammed the soccer ball against the wall.

I jumped about five feet and Theo spun around, spooking for the first time in the two hour bombproofing clinic.  It was something she'd done five times while showing the soccer ball to other horses, but when it startled me, the both of us spooked.  Lo and behold, we were the perfect example of a pair where the horse takes confidence from the rider.  The rider gets spooked?  We're toast.

I enjoyed the clinic.  I do a lot of ground work with Theo, but it was the first time I've done a formal clinic on ground work.  It's also the first formal introduction I've had to natural horsemanship.  We did disagree on treats (she doesn't believe in treats at all and, well, we all know my stance), but we agreed to disagree.  Theo is so adapted to my method that she never even noticed him getting a treat.  He got several for being a very good boy in a lesson where the rules were very different.

Next clinic will include under saddle work and I expect her to bring out the big guns, since Theo and I weren't phased by anything we did today.  I think I'll pick up a rope halter for him to lunge in, I liked the way he worked in it.  Most of the time when I'm lunging him, I'm trying to get him to relax and stretch out without my interference.  The rope halter could work for that.  Also will work for my plot to ride him without a bridle.

But I was proud as punch when my horse was the gold star student, the demo, the unflappable.  He yawned and dozed and generally enjoyed a day of something completely different.  A cold, snowy day is a good day to play a totally different game.
Posted by Catie at 6:20 PM