I moved to New Hampshire just over three years ago.  I have to say, I love it.  Some parts of the year, I feel like I live in a postcard. That shot is from my drive to the barn today, just outside of the classic little New England town I call home (yes I pulled over, our cops are always bored and looking for a reason to pull someone over).  It's the highest point for miles heading east, giving us an amazing view every time I go out.  Before I moved out to rural New Hampshire, I didn't think areas like this existed outside of paintings and jigsaw puzzles.

As  someone that grew up in the midwest, the whole area is fascinating.  Our roads are lined with stone walls that are hundreds of years old.  The roads wind through the country, following the same paths they've followed since before the Revolution.  Both of the villages I drive through are full of colonial era buildings, white churches with steeples, and rail fences with sturdy posts.  The barn I board at is older than the country. 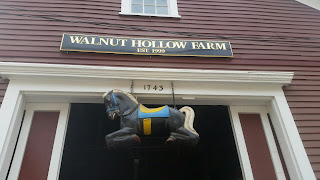 It makes things a bit quirky, the ceilings in the stalls would be considered too low by modern standards and I will never get used to a multi-level barn, but it's very cool to walk on the same boards that have been used for centuries.  There aren't a lot of silos left in our county, but there's one on the back of the barn.  I need to get some pictures of it.

Fall is my favorite season in New England.  It's beautiful, the bugs are gone so our trail rides are relaxing, the air has just enough bite to make it refreshing.  The leaves fall around us and cushion hoof falls so there's almost no sound.  Everything is gold and red with accents of green from the pine trees.  Heavens know I needed a nice, quiet, relaxing trail ride in November. 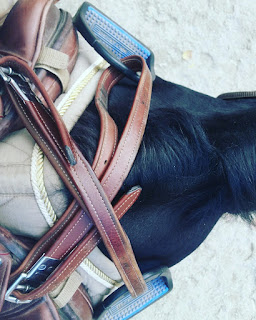 Because November isn't all picturesque scenes and the smell of spices.  My poor thighs.  Sleeping on the couch to avoid the stairs is already a thing and we're only on day 5.  I'm supposed to jump without stirrups on Tuesday.

May the gods have mercy on my soul.  Isn't there an age limit on this crap?