Poor papi.  He has to put up with a lot.  Not only do I do dumb things to his hair and occasionally make him wear a funny hat, he also has to manage the fact that I'm an adult ammy that's used to being in charge.  I'm a micromanager in the saddle.  It's a blessing and a curse.

It makes me well suited for dressage.  I will manage the exact timing and placement of that hind leg!

Downside is that I beat myself up when I'm away from the barn and question myself constantly.  Is this horse really, really capable of moving up? 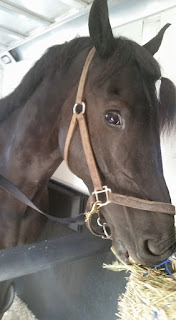 Just look at that hair, that's not the hair of a serious business dressage horse

But now I have video to reference every time this comes up and it's a godsend.  When I start to envision Theo as some sort of toe dragging joke of a school horse that will never make it past First 1, I can look at the videos and go 'nope, he's doing just fine'.  I mean, what do I expect with just one year of serious resculpting?  I haven't even owned him for a year yet.

This, right here, is a horse that will go Third. 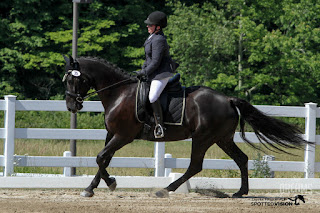 Seeing video has also made me realize that my obsession with fixing his canter worked.  Worked damn well.  He looks more engaged, more enthused, and more correct in his canter than his trot.  Whoops.  Over shot a bit on that one.  Time to go back and bring his trot up to match.  But everyone says the trot is the easiest gait to fix.  I guess that's a good thing?  Because I've worked so hard on that uphill canter that our trot became the way to go from place A to place B.  I can power up his canter and I get better scores on our canter lengthens then our trot lengthens.  Which is hilarious on a horse that used to have a four beat canter that I could barely maintain down the longside.  I remember when I first did a test in the large arena and thought I was going to die by the end of the canter work.  And that was just Training 3.  First 3 is canter hell!  It just keeps going and going and going.

So we will spend the off season doing more transitions than any sane pair should do, shifting the weight back and building the muscle so that it becomes our natural way of going and I won't forget how to do it when it really counts.  We know how to do this dressage thing, now we have to lock it down so it's the most natural way to move for both of us.  It has to be muscle memory that we snap back to regardless of what's going on around us.

I sent my test video in to be analyzed to pick out music for our First Level freestyle.  I have every confidence that we'll be ready to get that 60% at First 3 in the spring and we'll be qualified for freestyle.  I want to work on it over the winter, know it at a gut level so I feel confident.  First analyze Theo to see what bpm is most appropriate for him, then music selection, and finally choreography.  I'm excited.  Next year is going to be fun for us.

I never made it to First 3 with Fi because of her tendency to pop changes in the counter canter loop.  Now I get to spend a whole season making sure we are rock solid at the level and ready to move up to Second.