I've been doing well sticking to my six visits a week schedule.  Yesterday was a close call, since I had a long day at work and I knew papi had just had two lessons so a day off wouldn't hurt, right?  But Saturday I have plans down in Massachusetts, so I dragged my butt out to the barn.  Time to get in some time on the trails and make sure a certain someone doesn't get ring sour.

Wouldn't you know it, he was quite fresh.  Our weather broke to the usual gorgeous paradise that's New England in fall.  A high of 81 with a lovely breeze?  Yes, please!  And today it's 77.  The sun was shining and the flies have faded, so I went out with the intent to have a lovely walk down the trail bed with some trot and canter to let him stretch. 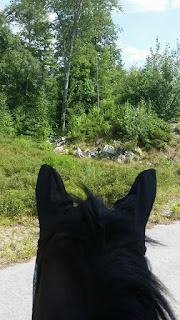 He was happy to be out there.  Too happy, if I'm going to be frank.  I picked up a trot and he bounced along like a kid in a candy store, sitting on the bit and all but begging me for canter.  To which I say . . . wut?  Don't get me wrong, I was enjoying myself, but he's hasn't gotten any time off.  Quite to the contrary, raised poles the night before!  Dripping with sweat!  Visibly tired!  And now he's bouncing down the trail like a four year old.

Of course I let him canter down the long straight away.  I had my stirrups at jumping length (because I'm lazy and didn't put them back down after my last lesson) so I got up off his back and let him cruise along.  This made him happy.  We had to stop to do some trail maintenance with a branch across the path, then back to trot and canter.  We cantered most of the way home with the occasional brake check.

We turned to cut across the Ritz and I spotted someone walking a horse in hand.  So I walked and sedately cut across the field.  About the same time I passed the other horse, I heard 'hand gallop!' being called down from the hill.  Trainer A had just finished her last lesson.  I shrugged, picked up a canter, and turned to go along the edge of the field.  Papi grabbed the bit and tried to bolt with a pretty decent buck.  I saw it coming three strides out so I was already in the back seat and popping his head up.  I made him finish the trip to the gate in a collected trot, which he was surprisingly okay with.  And the buck had me laughing more than anything.  Sometimes papi's gotta papi.

We opened the gate and went up to say hi to Trainer A and one of the moms.  The kids were being slow turning their horses out, so Theo and I were sent to go check on them.  So I took Mr. Studmuffin back into the field to jaunt over and see what they were up to.  Then canter back again, because as funny as he is, bucking is rude and he shouldn't think he gets to do that every canter in the field.  I had to keep him firmly on the contact and my tush firmly in the saddle, but he handled it with good grace.  He was just wound.

So wound that he jumped and struck out while being led.  And then snorted, bucked, and cantered when he went in his field.  Honestly, mi papi.

So what do I do with a horse that is more wound after his workout and who has more pop when he's getting consistent work?  And he was sweaty, it wasn't a mosey in the woods.  I'm used to horses that act up to start, then settle as the excess energy is burned off.  A couple of days of heavy work and they settle in and get more mellow.  Theo is wired backwards.  He's usually more intense and responsive at the end of a lesson and he's ready to roll when he doesn't have time off.  He was snorting and tossing his head after his run through the woods, not before.  How do I manage an increasingly fit horse that gets more intense as he works instead of working down?

Though not kicking was AWESOME.  If I can learn to harness all of that power, he's going to be unstoppable.
Posted by Catie at 7:13 AM