As part of my attempt to mix things up, Theo's been out on the trails a lot.  On Wednesday he played lead horse for the group of adult ladies while we showed them where we go to do his canter sets.  He enjoyed the nice walk, though he was a little confused when we walked the whole thing instead of cantering.  Being lazy is nice, but going for a canter is also nice, especially when the bugs are out really thick.

Today Trainer A took us for an adventure up a set of trails I'd never tried before.  There's an old logging road running up Walnut Hill, leading to a cell tower at the top.  Instead of working in the ring, she grabbed Baby Pony and showed us the way up.  I remembered to turn on my ClockIt app. 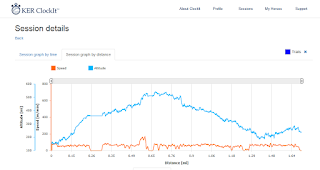 Considering our rides usually look like this for altitude change, it was quite a difference for mi papi.  Note the scale change for altitude. 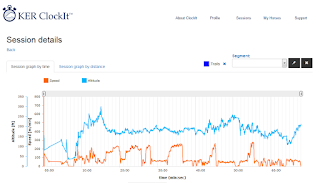 400 foot climb in 0.6 miles.  That's pretty steep for a horse that usually sees nothing more than 100 feet in change throughout a ride.  That initial climb in particular had the ponies blowing and we had to stop to let them catch their breath (the spot where everything goes flat).  Theo wasn't blowing anywhere near as hard as Baby Pony, so our fitness work is definitely on track.

Aside from the elevation change, Theo had to be a serious business trail pony.  This trail isn't really maintained, so there were a lot of branches to dodge (or tear down and eat, as he saw fit) and some rock faces to navigate.  Since he wears shoes all around, granite rock faces are not something to handle lightly.  On the way up we slalomed our way along, finding the dirt paths.  On the way down, I let him figure out some sections.  It was adorable seeing him put his head down and check before tippy toeing down tricky sections.  He's never offered to put his head down and check his footing before, so that's a great lesson for him to learn.  Next time I'll go in my jumping gear so I can lean way back for the steep descent without hating my life and the cantle of my saddle.

I'll also try to get pictures.  It's quite pretty and looks like something you would never take a dressage show horse up and down.  Baby Pony looked quite at home, his spotted butt carefully marching up and down in his bare feet.  Theo looked a bit more out of place, but showed off how sure footed he's become by never missing a beat.

Tomorrow I have to go back in the ring before I completely forget how that's supposed to work.  As much fun as we're having, I do need to remember I have a three day show coming up in two weeks.  I need one more qualifying score before I can decide to officially slack off for the rest of the summer.