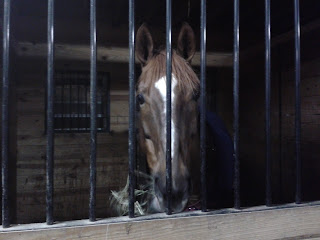 
Signs that your horse may be a super star:

- She goes out for a quick trail ride in the woods after being ridden only once in the last five days.  During this trail ride, she has a brisk canter around the pond before going back to walking on the buckle.

- After the trail ride, she heads to the ring to have a nice dressage school while dodging small ponies with their beginner passengers.

- She is loaded up, alone, and hauled off to the Eastern Exposition Center without a problem.

- She stays for the night, alone, and the next morning your neighbors comment on how polite and friendly she is.  She eats everything and lays down to sleep.

- She heads into a small ring set up in the vending area with four horses she doesn't know for a one and a half hour clinic without batting an eyelash.

- She handles miniature horses (in a tie dye sleazy) being lunged, big horse drawn carriages, reiners, slamming overhead doors, and even some dressage stallions hitting on her with nothing more than the occasional incredulous stare.

That, in summary, was Fi's weekend.  And yes, that means she is a super star.  Our clinic at Equine Affaire was in a rather small ring set up along the side of the vending area.  There were bleachers on two sides, and despite the early time, there were a lot of spectators.  The princess walked into the ring with wide eyes, followed by craning her head every which way, trying to see everything that was going on.  Every time she got a long rein, she would turn her head toward the crowd to check them out.  She was so social that she would stop and reach over the top of the rail to visit with anyone nearby.  I suspect she was checking to see what kind of snacks they had.

The actual clinic was pretty quiet.  Fi was really good, so I was working hard on my position.  I got some good tidbits, specifically around breathing and hip movement, to work on.  I wish we'd been in a typical clinic environment so the clinician didn't have to play to the crowd so much, but I really enjoyed the clinic.  I think it was worth hauling Fi out for, both for the experience and for the work on my position.