Little known fact.  I drive a Toyota Yaris two-door hatchback.  This is a sub-compact speck of a car.  Tiniest turning radius I could find, and I can parallel park anywhere.  I have also crammed eight people in it, including five teenagers in the backseat with two dogs (one with gas), but that's off topic.

Another little known fact:  I suffer from road rage. 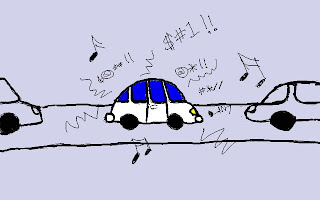 If you are ever in the New England area and see a little white car with angry music blaring, a ticked off petite woman cussing at the wheel, and stickers for both the USEA and USDF in the back window, it's probably me.

The seasons are changing.  The leaves are falling, the temperatures are dropping, and the sun is setting earlier and earlier.  These days, we're done riding by 6:30pm at the latest.  Darn these seasonal changes.

At the same time that daylight is becoming a scarce commodity, the state of Massachusetts decided to start construction on 3 North.  This is my typical route to the barn and is the only realistic way to get there in under an hour.  With the construction, if I hit rush hour, it takes over an hour to get to the barn.

Now you're seeing where this is going.  Full time job, half time school, sudden increase in drive time just as daylight is cutting back . . . Let's just say that I've managed to keep riding enough for Fiona to know who I am, but my manager isn't always thrilled.  The downside is that I'm usually wound up tighter than a top.  Blaring angry music and yelling along usually helps (Limp Bizkit, Korn, Disturbed, and a bit of Mindless Self Indulgence, for those that are curious).  But any amount of tension is a bad idea when dealing with a thoroughbred in fall that isn't getting the amount of work she's used to.

Fi has gracefully accepted being let down from her competition fitness, for the most part.  She's always such a lady, even when she gets extended time off.  It really is one of her best features.  We've made progress with her jumping, all the way up to trotting cross rail courses calmly and politely.  She's certainly not trying to cut out.  We're taking this as a chance to really rebuild and teach her to calmly and politely jump.  No bombing off afterwards or beforehand allowed.  She seems much more comfortable after her injections.  She still has the occasional bad step on the left hind, but I don't think that will ever go away.

Next week we have a private lesson with my trainer's trainer.  The jury is still out as to whether it will be a jumping or flat lesson.  I'm leaning toward flat, since it seems a waste to have a private to trot over cross rails.  We'll see.  Fi and I had a really lovely flat ride today, including her stepping into a canter from the walk and carrying herself in a very balanced way.  After I worked her down.