It's hard to keep things in perspective.  It's easy to think in absolutes, but hard to stay within uncertainty.  It's simple to say 'Fi doesn't want to be an eventer anymore', but much harder to say that she's one hell of a nice eventer, but she has an issue right now that might or might not be fixable.

I have to mention here that I love my vet.  She's so darn patient with all of this.  Fi is a puzzle, not only to trainers but to vets.  My vet has been watching her on the ground and under saddle for weeks now, slowly piecing the bits together.  I was able to be there today and be the one in the saddle while she was evaluated yet again.

The princess did give us a pretty useful clue this time.  I had to give her four days off due to it being the end of the quarter for work and my first week of classes for the fall quarter.  That meant that her back was feeling pretty darn spiffy.  When I rode her, there was a definite stickiness to the left hind.  After her ride, her back was more reactive.

The vet got out the ultrasound and I darn near passed out.  I've never seen that thing without it being bad news.  Like career ending bad news.  And then the vet said 'ah!' while looking at the images.  Oh, Goddess help me.  Save me from vets saying 'ah!'.  In this case, it was okay.  Her stifles weren't particularly swollen and all she saw was some remodeling on the left that suggested she'd had some instability in the past.  I already knew that, since her left stifle was the one that slipped when she was out of work and weak.  The vet said that everything looked fine to her, just some jewellery that wasn't unexpected, and we moved on to injecting her hocks and left stifle to make her more comfortable.  I was so darn relieved to see that ultrasound leave without any horrifying prognosis that I had to lean on Fi for a moment.  But just for a moment, because the princess had to be sedated for her injections.  My girl is such an absolute wimp with sedatives. 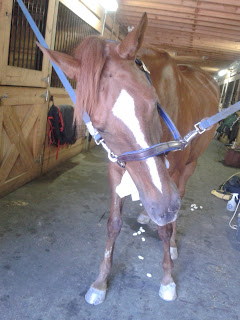 I seriously thought she was going to fall down.  At least her reputation proceeded her and she got less than the standard dose for her size.  That white thing at her chin was a towel stuffed in her halter as padding while she leaned on the cross ties.  We flipped the clasps over to make her more comfortable and to make sure they held her up.

So she gets a couple days off and some cold hosing.  Then we'll see.  Her Lyme titter came back negative (again) so it's not that.  My vet really feels that she's got a bilateral issue behind, more left than right, and that her back issues won't sort out until she feels she can really push from behind and use herself properly.  With the remodeling found, I think we're on the right track now.

What does that mean?  I don't even know any more.  She's jumping cross rails again with confidence and enthusiasm now that the vet has her back pain under control, so at least some jumping is probably in her future.  If we can root out the actual cause, it's quite possible she'll be back at Novice next summer.  My vet and trainer are both optimistic for that, so I'm trying to follow suit.  This winter will be focused on getting her show ring ready for First Level 3 and getting us started on Second Level dressage.  If she decides she still wants to be an eventer, then we'll head back out at Novice.  I hope she decides to be an eventer again, but it's up to her.  She's too nice of a horse to ruin by forcing her into a discipline she doesn't enjoy.

For now, we just have to wait and see if this new tactic will make her comfortable and if she'll want to jump again.