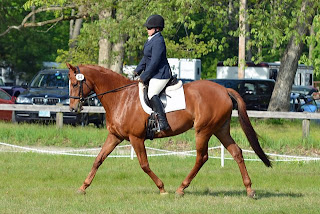 Fiona and I at the GPC 3-phase

So yesterday we had a dressage show.  First one of the year and the first one in ten months.  A lot has happened in those ten months.  A whole heck of a lot.  Fiona was gone for the better part of four months, for one thing.  We do most of our heavy lifting for dressage during winter, so that's a bit of a setback.  For another thing, when she got back, we were very much focused on fixing the jumping fiasco.  She was winning the Beginner Novice dressage (and sometimes the Novice) so there wasn't a lot of pressure to work on the dressage until May when I started to look at getting to a dressage show.  The princess was going better than ever, so the move up to First Level sounded completely logical.

This was a move up show.  Pure and simple.  Fiona has never been asked to do a First Level test in competition.  It's the equivalent to a Training level USEA test, though I think it's somewhat harder due to the order of the exercises and what the judges are expecting.  It includes lengthenings in trot and canter, ten meter turns at the trot, and fifteen meter circles at the canter.  Our canter transitions also have to be on a marker, as opposed to between two markers.

While I have done this level before, it was only on a very limited basis and was about eight years ago on my previous horse, the old schoolmaster.  Fiona and I are both very green to this level.  I think the judges could tell by the deer in the headlights stare as we came down center line.  We don't have a dressage arena to practice in and it's hard to do accurate figures when you can't practice them at home.  I was craning my head, looking for markers for my circle, instead of riding my horse.  Not good.

However, we did get a 57%.  We weren't in last place and it's not even an embarrassing score.  Disappointing, but not embarrassing.  Heck, we even got a ribbon!  That 60% mark seems very much in reach with some more mileage.  We just have to figure out how to practice when we don't have access to a large dressage arena.  I was in the middle of my 'free walk - medium walk - trot - canter' sequence and I remember thinking 'these are coming up so quick!'.  A transition every ten meters and each one having to be precise is a big jump up from a Novice dressage test.  Fiona was an absolute trooper.  Our test was workman-like, we hit each movement and scored nothing below a 5.  We just didn't have the fabulous movement of a lot of the warmbloods to make up for our rookie mistakes.  I was riding conservatively so our trot lengthenings didn't score well, but the canter ones did.  I know some of my friends were holding their breath, waiting to see if we would manage the downward transition after my speed demon shifted gears, but she came back nicely.

The judge wrote 'sweet horse' on her score sheet.  I think I'll hang it on the fridge.

My Training Level test didn't have the same pressure.  It's still tougher than the Novice test for USEA, but bigger circles than the First Level and no lengthenings.  I also had less pressure on me, so I went in there thinking 'just school the test, this is just practice'.  It did help me remember to breathe and I was able to get a better test because I made a correction rather than just letting her do whatever she wanted.  When she started to barge off, I made the sharper correction, which may have knocked that movement but made the next three better.  Another workman-like test from a pair of dressage green beans.  We got 13th out of 22 riders, including a lot of pros taking their fancy babies out for early mileage.  Not bad at all.

The show was a wake up call in a way.  All the training in the world won't help us if we can't get it together in the show ring.  This means I need to practice in a dressage arena so I'm not frantically looking for letters in my test rather than riding.  It also means I need to RIDE my test rather than perching up there and turning into an alien because I don't want to upset my mare.  Who promptly gets upset because I'm being weird.  I also need to push my warm ups.  For my first warm up, I just kind of got her together and moving.  For my second warm up, I was doing leg yield, shoulder in, walk to canter, halt to trot, and everything else to get her bouncing more and listening.  I felt really silly doing that before a Training Level test, but hey, everyone else was doing the same thing.  The result was a much softer feel and my horse being much more responsive.

Bit by bit, I'm figuring out how to actually compete in dressage.  I'm hoping to do one more sanctioned dressage show this year with First Level tests 1 and 2.  We can do it at home, I just have to figure out how to take it on the road.  In the meantime, back to Novice land for the UNH horse trials in two weeks.