I sat down and counted last night.  Six sanctioned events for the princess in 2012, but not a one with me in the saddle.  That's a very strange situation to my little mind.  She's my girl, I should be showing her!  But today we fixed that little problem.

The princess and I hauled off to Valinor Horse Trials for her seventh sanctioned event of the year.  I love, love this event.  The sandy soil provides good footing and the rolling hills give a lot of terrain.  The jumps are inviting and I always enjoy my runs here.  So does the princess, and we all know that this is all about what the princess wants.

After a mini-boot camp for jumping this week, including a cross country school on Friday, Fi just wasn't in the mood for dressage today.  She felt stuck through her back, possibly stiff, was a bit trailer bound, and I didn't do a good job of pushing her through it.  Okay, let's kip the excuses and get down to the actual root cause:  yet again, the nerves nailed me in dressage.  Darn those judges and insisting on watching me so closely and making me all nervous.  But to put it in perspective, we got a 37.5.  That's the first time I've gone sub-40 with Fiona at a horse trial.  As disappointed as I was in my performance, it says a lot that we are still a full five points down from our run at Valinor last year.  If our bad days are now in the thirties, we're still making progress.  This put us tenth out of 13 or 14 entries in our division.  Well, at least we weren't last?

Our jumping, though.  Oh, our jumping.  As my trainer said several times, that was the nicest stadium round we've ever done.  Period, end of story.  Fi warmed up reasonably well, despite the traffic and some near collisions (I HATE the beginner novice warm up ring, this is a big motivator to move up).  We trotted into the show ring and the princess shifted gears.  She was no longer trailer bound, she had her game face on.  The approach to the first fence was goofy so I just started her course at the trot.  She cantered all of the rest in a very mannerly fashion.  Hunter pony she was not, since my half halts still have to be pretty aggressive in places, especially on the downhill sections.  The stadium course at Valinor has considerable terrain so we had to be balanced quickly.  She pulled the course off without a rail or a flier or any twisty goofiness.  The ring steward actually complimented us on our nice run afterward.  I darn near cried. 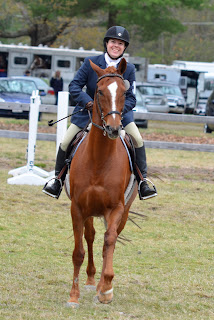 It was straight to cross country after that, which I love.  There was almost no wait.  I checked in with the steward and they gave me my two minute warning.  We were off before either of us could get tense.  Our biggest problem was that the jumps were little and the pace was slow.  We were going at 320 mpm for this course and it was an early season beginner novice.  Fiona made bids for several novice and training fences and seemed genuinely confused by the little fences.  That didn't mean she wouldn't jump them.  She was as bold and honest as anyone could want.  I thought for sure she was going to look and back off at the scary tire jump so I got in the back seat and really put my leg on.  Evidently it wasn't that scary since she boldly moved up and then left a stride out.

But we finished with a big gallop up the final hill.  Fiona had plenty more in the tank and I had a big smile on my face.  I figured that we were out of the running for a ribbon with a soft cross country course, but it was still a fabulous outing.  Turns out I was wrong.  Fiona jumped up five spots with her clear rounds to end up in fifth.  Our best finish as a combination.

A couple days ago I was talking to a friend about partnerships with horses and how it's all about what's acceptable to the rider.  It's very individual.  One person will adore a horse that another person can't stand.  We both thought of a horse that we knew that was a saint to ride, but a grump on the ground.  I laughed and said that Fiona had to trade on her perfect ground manners, because the heavens know she's not a saint.  I was asked which I considered more important, a horse with good ground manners or a horse that's a saint to ride.

I couldn't really answer, because as far as I'm concerned, Fiona's just perfect at both of them.  It's all a matter of personal preference, and I like the wild ones.
Posted by Catie at 4:57 PM