Courage is being scared to death but saddling up anyway.
- John Wayne

That quote is in honor of my entirely chicken reaction to this being on the course for this morning's jumping lesson: 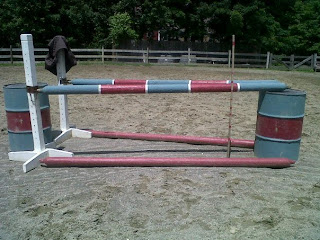 I went back down to the arena after our lesson to retrieve the vest I forgot (the one in the picture) and decided to snap a picture as a memento.  According the measuring stick that's in the arena, this was just under Training, so about 3'1" or 3'2".  The height was one thing, the approach was a whole other.  A tight, left hand turn going to a corner that invites the run out on the left . . . on a mare that has a left side run out.  And she'd run out on me a couple times in a combination.  I'll admit, I rode that thing like we were going to war because I just wanted to get over it.

She cleared it beautifully.

It was a tough jumping lesson as the princess was having some trouble focusing.  She's not always sure if we're going over or around, so that's a bit of a challenge.  I can't let her just gallop down to things, so she gets flustered when she has to shorten up.  We also struggle with combinations since the distances are always tight for her, so I have to whoa and shorten, but at the same time she loses confidence and I need to kick on so she continues on to the second fence.  If I botch timing at all, she runs out.

I nearly lost my temper, it was a close call.  I'm never, ever allowed to lose my temper with Fiona, she's far too sensitive.  She would completely melt down.  I think she's afraid of being wrong and a lot of our issues can be tied back to her being so desperate to get it right.  Fortunately the trainer stepped in with excellent timing to keep me from getting overly cross.  By the end we had our groove back and she was carrying me straight to the fences again, but I definitely feel like I need to have my war face on to get her around.  Not aggressive, but very confident and clear on exactly what I want and where I want it.  We're having a crisis of confidence right now and I need to be confident enough for both of us.

But when we got it right?  She darn near jumped me out of the tack.  Scope will never be her issue.  It does tell me that she is not ready for any move ups in the near future or possibly for a long time.  Stadium still boggles her mind.  Poor little princess.  With the little fences we have more options to get it wrong and not get hurt.  By contrast, our dressage school on Tuesday was beautiful while we focus on her carrying herself and not trying to balance on my hands.  She gave me her first baby steps of half passe while I was working on getting her to really listen to my legs rather than just performing tricks.

Our next outing is at Beginner Novice, so that should be a good, confidence building type of an outing.  The jumps will look like nothing when we're schooling Novice and occasionally just over at home.  She went really well at Valinor last year, the stadium is nice and open.  We've got another jumping lesson tomorrow to build up her confidence some more, a cross country school on Friday for even more confidence, and then we're off to our first sanctioned of the season as a pair.