There's a lot to be said for school masters. The old warriors that many of us learned on, that ignored our mistakes and carefully got us through those early courses or dropped us on our heads when we deserved it. That is part of the learning process, after all. Actions and consequences, or in the case of riding, continue to duck at fences and you will be eating dirt.

Eventually we graduate to more complicated rides, the ones that won't ignore us being stupid or who don't know just what it is we're asking. I've been riding one of those 'complicated' rides for awhile, so I thought that hopping onto a school pony would be a breeze.

Dear old Dodger. He's the kind of pony most instructors will give their right arm for, and possibly a portion of their left. He's the perfect size, small enough for kids to feel safe but big enough to take a small adult. At 19, he's got most of the kicks and quirks worked out. He's cute enough to go to the sanctioned shows but not such a big mover that a beginner is bounced out of the tack. Point him at a fence, get out of the way, and you'll get over it. It might not be pretty, but he doesn't have a dirty bone in his body. He is the picture of a schoolmaster and is a novice level packer extraordinaire. This shrine of pony perfection was my mount for my dressage lesson. 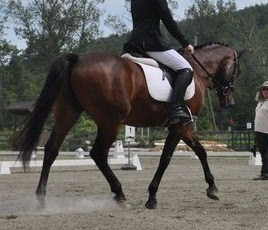 Dodger, strutting his stuff at the Novice 3 Day
Hopping onto a pony that's forgotten more about cross country than I've seen set me thinking that this would be a good lesson to focus on me. Clearly Dodge doesn't need any work. I'd forgotten what it's like to ride a real school horse. They constantly have different riders on them, and while Dodger is reserved for riders that are jumping and riding independently, mistakes are far more common. Once he was a bit warmed up by trotting on a long rein, I picked up a contact and tried to press him onto my outside rein. Little pony's ears started flipping about and he easily went into a little frame. He looked quite adorable, but he felt strung out. When I increased the feel, he put his nose to his chest. Mind, he goes in a loose ring snaffe. So I eased off and he went back to the little frame that he does so well. The message was clear:

You keep out of my way, I'll keep out of yours, and we'll get along beautifully.
Poor pony. No one told him I'm a control freak. When my instructor asked how that felt, I replied with 'he's faking it!'. But he's such a good faker, and I can totally understand why he does. Kids first learning about 'on the bit' aren't going to be that accurate about it. I spent the rest of the lesson trying to convince Dodger to not duck and hide from my hands. I promise, they're well educated and I won't use the reins to prevent me from falling off!

It was a demanding lesson for both of us. We were both quite winded by the end, and I felt a bit bad. Come the next day, Dodger will go back to carting about a variety of students and the false frame is a nice setting for that job. It's good for him to get tuned up, especially since part of his job is moving kids up the ranks, but it has to be a bit confusing. Sometimes I wonder, is it easier for a school pony to be ridden by someone more experienced? They expect such different things and ask in such different ways. They tend to be much more demanding.

But in exchange, experienced riders are more balanced, quiet, and aware of their horses. And we know how to really rub a pony down. Dodger looked like he was in heaven when I attacked his sweaty, itchy self after the lesson. Little girls are cute, but it takes an adult woman to really curry a blanket clipped pony. That and a handful of fancy treats (don't tell the princess) ensured that my schoolmaster won't mind giving me another lesson if he comes up again on the rotation.