Yet again, I had the picture of pony perfection as my partner for a lesson. And even better, it was a jumping lesson. I don't care who you are or how long you've been riding, there is something about riding a horse where all you have to do is point, keep your leg steady, and don't move that just makes you look good.

Dodger made me look good. Add in strides on a line? Sure! Heck, let's add two, just to be sure. Take those strides out? No problem. That pony can stride just like a horse when the mood takes him. Height? Pffft. This pony wins knock-down-and-out classes against the best eventers in the barn, to say nothing about his habit of jumping out of pens from a standstill. Riding Dodger over fences was an exercise in letting the horse take care of things, because in the end, he knew his job far better than I did. My instructions for the night were to not micromanage him, because unlike certain chestnut Thoroughbred mares, he knows exactly what he's doing. It felt simply amazing. Set him up in the corners so you have the right canter and then just get out of the old man's way.

I think I made up for our dressage lesson. He certainly wasn't mad at me after the jumping lesson. We only had one fence where I thought he should go long and he thought he should chip, so I was a little out of place. I had to laugh, because he'd lulled me into thinking that no matter what I did I'd look perfect. At least he's sweet enough to not set me in a fence for being dumb.

But even the most perfect ponies have their vices. For example, here is Dodger after our lesson. 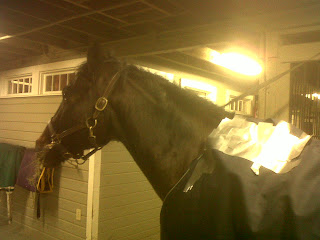 That splash of silver? Duct tape. Dear old Dodge is hard on his blankets. Very hard. This blanket was flawless last week, but now? I think the old man was involved in some of the shenanigans in the gelding field. Those boys are always playing rough, and it's usually the blankets that pay the price. 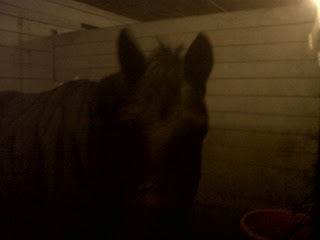 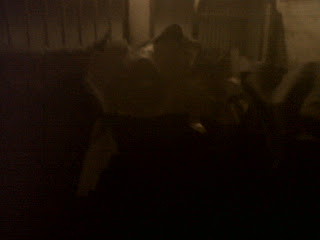 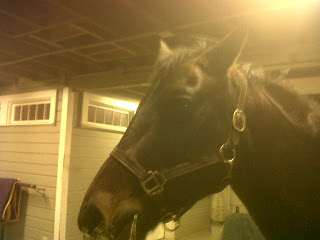 Okay, a little bribery got us somewhere, but you know a pony's too smart when they know how to use lighting against you.

I got an update on the Princess, and she's off to a schooling show on Wednesday. It got rained out on Sunday. Her first two-phase of the season! It sounds like my trainer is enjoying her and she even said that they're getting along over fences. Reports are that she's been a machine on the hacks and is in general being a pleasure to ride. She calls for her new boyfriend, but that seems to be the only way she's acting up. I can't wait to hear how the trainer does with her at the two-phase! Her first sanctioned trial is Feb 4th. Practically around the corner already. I think I have another opening date coming up . . .

Damn, time to check the schedule.
Posted by Catie at 6:27 PM