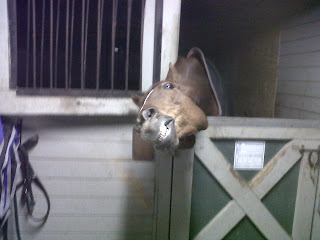 A face only a mother could love.

My mare is a weird, weird young lady. This is her 'I'm staaaaarving and dyyyyyying and they never feed me and I'm just gonna waste away if you don't give me another treat' face. Just out of frame, her neighbor (and boyfriend) the warmblood was getting treats after his lesson. The princess did not approve of anyone else getting treats while she had none. Clearly, this girl is not worried about maintaining her figure. If it's not bolted down securely, she'll eat it.

I also caught her working to unlock her door while I had the top half open. Clever clever. You can see the latch in the picture, it's a horse shoe that you lift and slide over to open the door. I came around the corner and she had the horse shoe between her teeth, working on sliding the latch over. You can also see the double ended snap hanging from the horse shoe, which is very useful with certain redheaded mares that are too clever for their own good. I wouldn't put it past her to stage a jail break and to bust out some of her friends.

Guys, were bustin' out of this joint. I know where they keep the good food and she's got a whole jug of those peppermint treats that she's been keeping to herself.
Somehow I envision Fiona as one of those girls that's so sweet and nice, but as soon as your back is turned, she's throwing the mother of all parties her senior year of high school. The kind that end with a car in the swimming pool and cops at the front door. 95% of the time she's the straight A student that everyone likes, but that other 5%? Look out.

Aside from her shenanigans, Fiona had another of our dressage lessons today. I did get some video which I'll be cleaning up and posting for everyone's entertainment. The video quality is . . . non-existent, since I just set the camcorder up on a tripod and hoped for the best, but there are some shots that show our progress.

Today's messages for the lesson were:

- Do not confuse tension with effort, and do not stop asking for effort just because of some tension

- Ask for more, because she has a lot more to give

- This mare hangs out behind my leg more than just about any horse I've ridden before. It's just hard to notice when she's so willing to go forward, but there's a whole other gait there that we managed to unlock today. Poor little mare, now I know better.
Video should be up soon, and just in time for the six month mark of Project Fiona. It's like Project Runway, but less drama and better outfits. For her, anyway, I'm wearing too many layers to be picky.
Posted by Catie at 8:26 PM