I was so nervous sending Theo to a multi-day show with Trainer Z.  He's always been a handful and takes a lot of management to keep him from getting dangerous. He loves Trainer Z and they've worked out a great relationship all their own but he's different when he's in a stall for a couple days.  I didn't want anyone to get hurt.  I've been glued to my laptop and phone for days, worried about getting a bad phone call.

Apparently, I didn't need to worry. 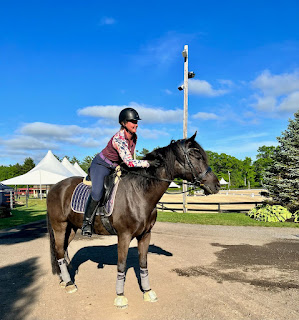 Friday was an awesome warm up with Theo being a total gentleman except for one banner which he decided was evil.  Trainer Z figured that would get her a good canter extension so win?  We'll call that a win.  And I've definitely corrupted her with the colorful get ups.

Saturday was a lovely Second Level 3 test to get that qualifying score for their freestyle.  They needed a 63% and Theo delivered a 63.09% on their first try.  There was a rider error in the test so there were points left for them to pick up and Trainer Z was delighted with his performance.  She'd never experienced show Theo who is an absolute twit in the warm up and then sparkles when he hits center line.  It's something you can explain but until you feel the way he lifts his back and powers up as he enters, you don't quite understand.  Trainer Z now understands.  I don't know how it's possible that a horse can understand something like that, but he understands what a show ring is and loves to show off.  In warm up he'll flip you the middle finger and have little temper tantrums but when the sand box is all his, it's go time. 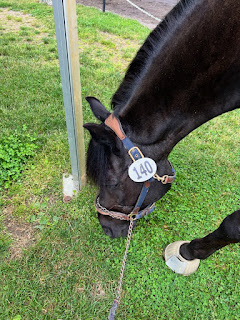 That was already a big victory.  They had the score they needed, they had the first show bugs out of the way.  Day two was just icing on the cake as far as I was concerned but Trainer Z wanted those points that were still on the table in the Second 3 test.  They went back in and got a 66.5% for second place in the open division for Second 3.  Ahhhhh!  I was so proud of them that I almost forgot he was also entered in Third 1 in case Trainer Z thought he was ready to give that a shot.

Apparently she thought he was ready because the scores popped up on my laptop.  60.3% in his Third level debut.  I'm so proud of them both!  His first show in years with a new rider and a new venue and he rocked it.  Absolutely rocked it.  I'm so excited, I just don't have words.  He's come a long way from the mutt school horse that struggled at Training Level.  Sending him off to Trainer Z was the best choice I could have made for him.