This is the Theo that has trainers offering money on the spot because they think he's perfect for their nervous adult ammies.  They also don't watch his warm ups so they don't know the truth.

He has the best attitude in this test.  This is his fancy prance and he's happy to show his fancy prance.  He's also happy to halt and even happier to walk.  I can see why his canter/walk/canter is usually his highest scoring movement.  The first one got away from them but the second one is how he usually does them.  Trainer Z is talking about doing a series of them down center line in her freestyle.  Daaaaamn.  I believe this is his test that got him a 67% with 7s and 8s for his technical movements.  6.5 for the medium which is a pop the champagne win as far as we're concerned.  At least the judges are giving him points for trying.

Since he's got the scores he needs to qualify for his freestyle, he's taking July off as usual.  It hit 90's this weekend with high humidity and he is a puddle.  He'll probably remain a puddle until the summer heat settles in August.  Good time for technical stuff, bad time to show him off.  The plan for him right now is to get Trainer Z her bronze bar in freestyle.  Which means he'll have to go get his qualifying score for Third next year but that gives him another year to dial in those flying changes.

July is hot, miserable, and a good time to take a break from training.  It is also the time that a very special baby is due and I'm scheduled to go meet them.  Surprise surprise, there is a respected Welsh Cob breeder two hours away from me.  Fingers crossed for a little palomino colt but the color doesn't really matter.  Neither does the gender if I'm going to be honest.  I'll happily take a chestnut filly with flaxen mane and tail just like the dam so long as they are built like daddy (mommy also has plenty to add to the equation) and have both parents' fantastic temperament. 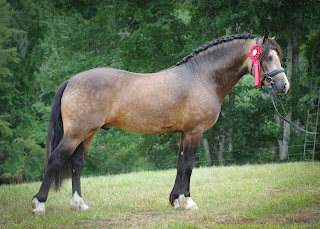 Quillane Authentic
The tough part may be choosing since there's a buckskin filly already running around that is pretty dang special.  Highly suspicious I'll be buying my first foal next month.  Whether it's the July foal or the pretty buckskin filly is really the question.  Don't worry, I'm bringing Trainer Z to keep my feet on the ground and my head out of the clouds. 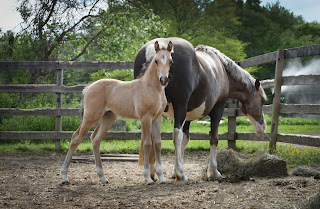 But Trainer Z has a weak spot for buckskin mares.  I did not know this.