I've spent the last few weeks trying to just get stuff settled into a sustainable pattern.  Shoes, supplements, stabling, training, all of it.  And I seem to be just about done with that.  Theo is working regularly, all of his needs are being met, and he is on his way to being fit again.  I'm riding part time and enjoying it. 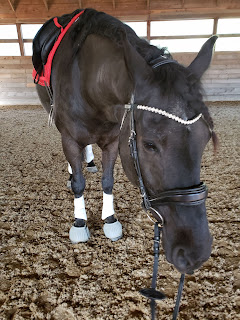 That's kind of the trick question right now.  As emergency mode fades away and I start to think long term I stall out.  What the heck am I going to do with Theo long term?  What makes sense for us?  I need him to be happy and well but I also need to consider how this will work for me.  I just got accepted to a doctorate program.  I didn't think I'd have a horse in my life so I intended to continue my education.  Awkward.

There's also the part where I can't do a lot of things.  I know from experience that a fit Theo that's doing big boy work can be a handful.  I distinctly remember him dancing the dance of his people around the ring while learning his changes.  Opening that can of worms is a non-starter for me.  Once he's learned something he totally doesn't care but I certainly can't be the one to teach him this stuff.  I need all four on the floor.  And let's be honest, his collected trot is a nightmare to sit even for people that actually have discs between their vertebrae. 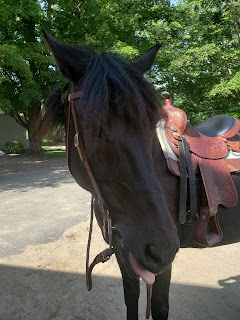 Theo has opinions about my bouncing during his trot

I'm too goal oriented to just show up, brush the pony, and ride around the arena.  I need to have something to work on, a goal to measure our progress, lessons, structure, all of that.  My old goal was the Bronze but the chances of me sitting the trot work in a Third Level test?  Pretty dang low.  My body may surprise me and from what I understand of my situation, technique may save the day.  It's all about minimizing the compressive forces.  But reality is that I'm not going to be working a mid-level dressage horse full time if I want to have a functioning neck 10 years from now.

Western dressage is good for keeping Theo chill and his collected jog is actually comfy to sit.  Not that I've tried it yet but even when I couldn't sit in my dressage tests I could sit his jog.  That could be a solution.  I'd still need to get a change on him but that would be a small change, more like a swap that you see in reining.  A bigger change would be even better but a small one might be easier for me to cope with these days.  Western dressage could give me something to work toward, I still haven't ridden a Level 3 test. 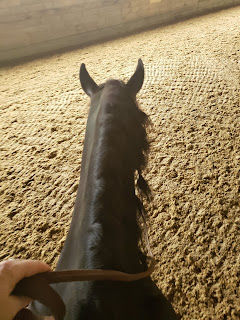 Being the weirdo even at the dressage barn

It comes down to my time and my body's ability to take abuse.  Both are in shorter supply these days and it wouldn't be fair to either of us for me to take Theo on full time.  I love having him near me and riding 2-3 times a week but I already know that he won't have another partner after August.  I have to plan ahead for when his teen goes to college and it's just me.  He won't be safe for me over the winter with just a couple rides a week.  I'm going to need to find him a second rider. 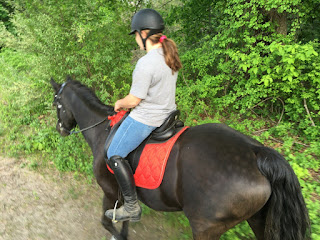 Hacking out with his new friend

I'm currently thinking that I'll be one of those posts on social media asking the local horse groups if anyone wants a half lease on an experienced dressage horse.  I have to accept the fact that I can't do this on my own and I need to find someone else to help me keep him in work.  Ideally, someone that wants to be his primary partner and just accept that this middle aged ammy with a wonky neck likes to ride sometimes when he's feeling lazy.  They can focus on dressage and show him as far as they can go while I jog about on my riding days and maybe, just maybe, go to the occasional show. 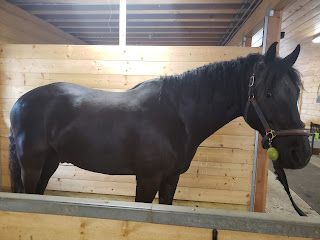 He's very happy now with his teenager, my friend, and me giving him attention.  He's doing once a week lessons with a local dressage trainer and putting muscle back on.  Everyone is on the same page and working on making him less lazy and more fit.  He'll be back to being a real dressage horse by fall.  And then we start hunting for a new dance partner for him.