I've had a complete dearth of Equisense data.  No, I didn't lose it or let Theo step on it.  Turns out there's a safety feature where it shuts off when temps get too cold.  It protects the electronics.  This may be a rare occurrence in France, but in NH?  It was always off and I was usually too cold to take it into the office and plug it in to get it to work again.  So for the dead of winter, no data.

It was 40 yesterday so I went ahead and plugged the unit in so I could put it back in rotation.  It should be warm enough for it to stay on all week. 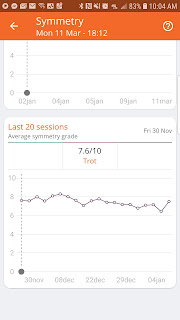 First, glad to see our symmetry, which had been really starting to concern me, bounce back.  We'd been on a slow but steady downward drift for a lot of rides in December.  For this ride, he popped right back to his 7.5 average.  That's a genuine relief. 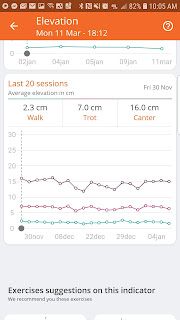 Our elevation had been drifting down while our symmetry drifted down, but now it's popped back to usual, at least for the canter.  Slightly down in the trot, but he was also trying to see if he could suck behind the contact for half the ride.  Using the topline is hard, mom!  How about I arch my neck so I look pretty and drop my back while not allowing you to take any feel, does that work?

Our regularity scores were terrible, but I've found protest bucking in the canter will do that.  Theo was having an extreme case of the opinions.  By the end he was stretching into the contact again, but I could tell he'd had other riders for awhile.  He is so good at setting that false frame and making everyone think he's light and soft.  And then he props and threatens if you try to push through it.  Yesterday was a bit of a difficult ride and I explained to him that moving your legs super fast does not equal forward.  I ended up holding my outside rein and kicking until he realized sucking back off the aids wasn't actually going to make me go away.  He's such a smart little puke.  He's not afraid of my hand, he's just learned that if he curls back, I will put my hands forward and kick him.  He can fall on his shoulders when I do that, so yay for Theo.  Now I'm holding my hands no matter what and driving him forward.  He's not a fan.

Thank goodness I have a lesson on Friday.  Dropping behind the contact and behind my leg at the same time is not my favorite evasion.  Fiona was the master of dropping behind all aids and then taking off like a bat out of hell.  I'd like to not have that happen.