I knew Theo was going to get sore with the stepped up work.  I'd discussed it with Trainer Z and started shopping around for a massage therapist to get him into a regular program.  Then I got sick and things got pushed off a bit.  I noticed some resistance to pushing into the contact that felt like he was avoiding connecting over the topline.  On Monday, he flat out put down and said 'nope' to a counter canter.  Red flags go off all over my brain.  Theo doesn't quit over stuff he knows unless it hurts.  Pony is hurting more than he's letting on.

I palpate his back almost daily, but he wasn't reacting to it.  If anything, he was leaning into it.  But he had tight, sore spots here and there.  I pushed hard, found a massage therapist, and due to a lucky scheduling coincidence got her out 24 hours after contact. 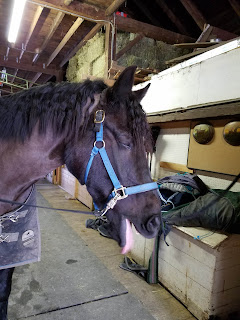 My poor pony.  He usually loves his massages, but he didn't enjoy this one so much.  Sure, there were some points where he sighed, yawned, and leaned into it.  But there were more points where he threw his head in protest.  He was sore in a bunch of different places.  All the places you would expect with collected work, but it had snuck up on us and I don't think even Theo realized how sore he was until his therapist sunk her fingers into some spots.  At one point he had his mouth open like he didn't know if he wanted to yawn or bite.

One and a half hours of hard work later, large swathes of his body were back to their natural, jello-like consistency.  Some spots, like right over his hips and the inside of his left hind will need more then one session.  I signed Theo up for weekly massages for the next four weeks so she has a fighting chance at getting through all of the accumulated tightness.

Theo was walking better and had a lovely canter around his field afterward.  Considering the yawning and the big smooch he gave his massage therapist, he already feels better. 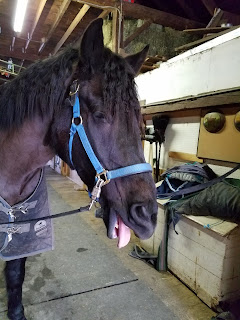 Weekly massages are just one thing that's going to happen.  I also signed Theo up to get his stifles done when the vet comes out for their spring vaccinations.  I've been hemming and hawing but he's got some compensation going on while he avoids that weaker right side.  Let's shoot up those stifles and see if that helps me straighten him up.  He'll also get that box of Adequan.  I wanted to time that right before the start of the show season.  Whelp, that time has arrived and pony is getting loaded up.  I want his joints as slippery as possible so he doesn't feel like he needs to compensate.  Compensating leads to whacky muscle problems.

His massage therapist didn't find anything wrong or unexpected, just a sore pony that's moving into collected work.  Once she's got him caught up, he'll go on a regular maintenance schedule.  And since she travels to dressage shows, we might even be able to book him some massages while he's competing!  That would be a huge benefit, he really does love his massages.  Even today when he was quite clearly in pain, there were plenty of sections where he looked like he was in heaven.

I dropped the ball a bit on this one.  I knew it was coming and should have been more proactive, but hindsight is what it is.  We'll just get him all tuned up and ready to prance in the sandbox.
Posted by Catie at 1:28 PM