Alternate title:  The Tale of My Horse's Zit

On Sunday Theo got his winter shoes on.  I'd been at a birthday party the night before and was feeling it a bit.  I was running on three hours of sleep.  While discussing shoes with another rider that uses my farrier (he now has four clients at my barn, go figure), I noticed that Theo didn't particularly want me to touch his nose.  That's super weird since Theo is usually on board with me touching his face.  Heck, he's usually pushy about it.  I messed with him a bit, tracking down the spot he didn't want me to touch. 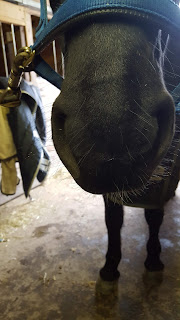 You can just barely see it just below his right nostril

I found a spot just under his right nostril that was hard and he didn't want me to touch.  Once I knew what I was looking for, I could see where it was a bit swollen.  I got someone to hold him so I could work my fingers up under his lip.  He was not amused, but once he got used to it, he seemed content to have me working around his lump.  I did feel a little hard spot, but our attempts at taking a picture failed.  I really wish we had video of us jamming a cell phone in my horse's mouth to take a picture of the inside of his top lip.

Have I mentioned that my horse is a saint?  There were several of us with our hands jammed in his mouth and a phone.  He was mildly perplexed, but stood quietly for the whole thing.

We came to the conclusion that he had something like a splinter on the inside of his lip.  It wasn't big, it wasn't affecting his nostril or his eating, so it wasn't an emergency.  I waited until the next day to call the vet rather than eat an emergency call fee.

Fast forward to Friday.  The lump is really pretty boring.  It got slightly bigger, but he was actually better with having me touch his nose.  When the vet arrived, he did exactly what I did.  Poor Theo, more hands in his mouth.  Yup, probably a splinter that got infected.  No sign of anything in there now and the lump didn't have any spots where he thought he could drain it.  Basically an infection that hadn't decided if it was going to be an abscess or not.

I have dubbed it Theo's zit. 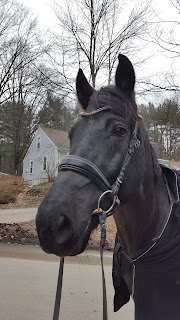 He says he doesn't get zits, he's 14 years old dang it

He's now on 15 SMZs twice a day to get the infection down.  If it resolves on it's own, all good.  If it comes to a head, the vet will go back in and drain it.  Theo's quite happy, eating everything in sight, and working like a dream, so no need to get dramatic.  If it grows or becomes a problem for him, we'll get more aggressive.

My poor pony.  I have to explain to people that he has a big zit on his nose and it's sore, so he might not like getting pet as much as usual.  Just focus on the ears, there's nothing wrong with them.