I didn't really believe in flying change hell.  It seemed kind of radical, considering how many times I've helped put a swap on a horse and not had any major changes because of it. How big of a change could I see in a lazy horse that just figured out his changes?

Guys, there really IS a flying change hell.  And I am neck deep in it.

Theo likes to throw his left shoulder out.  Okay, fine.  He also has days where he prefers one lead over the other.  What lead he prefers changes from week to week, so I don't worry about it too much.  Some days the left is awesome, some days it's all about the right.  It doesn't stick, so I assume he is just a super sensitive boy and any little ache makes him avoid that lead.  We had a little while where he'd try to break and swap leads to whatever he preferred, but I fixed that.

I picked up my canter to the left.  I didn't like the bend I was getting, I wanted his shoulders on the correct side, so I pushed him over with my inside leg.  Boom, lead change.  Well, okay, my leg may have drifted back a bit while pushing his haunches out, fair enough.  Walk, pat, pick up the left lead.  Adjust the bend and . . . . boom.  Change. 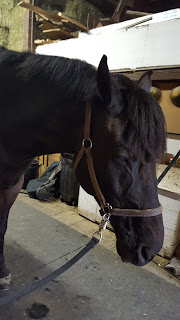 So tired after a serious business dressage school

Two changes on one long side.  In the span of two weeks we've gone from never doing a change to popping them at the drop of a hat.  Counter canter?  HA.  We have no counter canter.  Hell, I barely have a regular canter.  I have to ride the hell out of my canters right now to avoid swapping out.  I can feel him shifting his weight back and prepping for a change any time I cut across the ring.  I shift my weight too much and he pops a change.  I can't correct him for it, it's what I wanted.  So I'm settling in for a full fledged run through FCH. 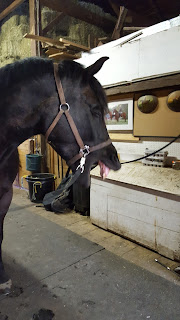 Being smart, talented, and beautiful is tiring!

I'm so glad I read up on this beforehand.  At least I wasn't surprised when I suddenly got eight changes in a ride where I wasn't planning on working changes at all.  I head toward X, change.  Whether I want it or not.  And then change back because being on the right lead is important now.  I saw some lead swaps with his leaser on Friday night but I thought that was because he was cantering over poles and she was losing her balance.  NOPE.  Full fledged FCH.

I guess there's nothing I can do but buckle up for the ride.  I can't complain, he's right on track to go through this.  I just wish he'd done this over the winter instead of one month before our first rated dressage show of the summer. 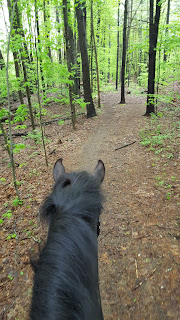 Oh, our h/j debut that was supposed to be today?  Rained out.  Did you know they actually cancel stuff for rain?  I'd forgotten.  We actually got snow this morning before it turned back to rain.  So we're still the biggest DQs in the barn.  Someone out there wants me to stay in the sandbox.