Just when everyone thought I'd fallen off the face of the earth.  Here I am!  Still employed, still riding, just figuring out how to do all of that, see the hubby, eat, and sleep.  Sleep is usually the one that loses out, so it's still a work in progress.

I have a severe hatred of my alarm right now.  It went off this morning and I seriously contemplated smashing it into tiny pieces.  I dragged my butt out for an 8am lesson, then rushed home so I could log in to work.  Working from home has started and it's making things easier.  Two lessons this week!

Between the training ride and Theo's leaser, he's getting work six days a week very consistently and is doing well.  He's already got his leaser's number in terms of teaching her to give him cookies.  He's also aware that she isn't going to push him.  We had to introduce her to wearing spurs and that when you say go, you mean it.  He snapped right back to being a very good pony, but I suspect she'll have a learning curve.  But it's a super safe learning curve.  She was practicing changing the bend through an exercise and Theo learned the pattern in two passes.  He just did the pattern while she tried to sort out what her hands were supposed to be doing.  That's how he earns all those cookies:  you can just flop and figure things out, he's good with that. 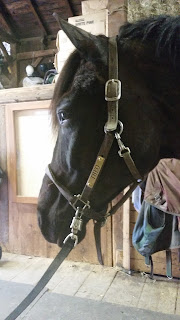 My schoolmaster in training

For my lesson, we were knocking some rust off of my jumping since he's got his h/j debut in a week.  He must have heard me ranting about his lack of a change because he either swapped over the fence or swapped in the corner.  Every.  Single.  Time.  I rebalance, ask, new lead.  It's not the big lift you'd want for a dressage change, but it's not a hunter swap, either.  It's back to front, I have to half halt, collect a bit, and deliberately ask.  I have no idea where the hell that came from, I haven't touched his changes in weeks.  We've been working on that simple change, getting him balanced and his weight back and . . . .

Oh yeah.  The stuff you need to do a change.  Hey, looks like it's working!  Trainer A assumed I'd been working his changes when he kept popping them in our lesson.  Nope.  Someone is finally strong enough, balanced enough, and confident enough to just pop over to the new lead reliably.  Which makes me feel better because if he's swapping leads on cue now, I should be able to do a change to get me through a Third 1 test!

Though I did get a taste of Flying Change Hell as Janet Foy refers to it.  I went to straighten Theo's shoulders and got a change.  Well, shit, that wasn't what I wanted.  But I can't correct him.  Just walk and pick up the canter again.  His counter canter is holding up fine on the flat, but over fences?  We were doing a rather tricky exercise with a 90* turn with six strides between two fences.  I landed, gave him a serious half halt with the plan to counter canter the second fence.  My poor pony has been working so hard on his canter to walk that he immediately shortened his canter to walking speed.  I tipped forward because I wasn't expecting his stride to suddenly shrink by half.  While still half on his neck, I started the turn and he had a mini flail, ending in a lead change.  I'm not sure what gait we were in, some bizarre hodge podge of walk, trot, and canter.  He was so ready to walk that he totally didn't know what to do when I asked him to keep cantering.  If felt like he got his legs tangled.  And then he felt he needed to change since we were jumping.  Still not sure how he got over the second fence.

Trainer A was impressed that we were both still upright after that pass through the exercise.  I guess it wasn't very graceful.

So I may have broken my counter canter for a bit, but that's okay.  I'm doing First this year and that's just the shallow serpentine he already knows.  Second 1 doesn't really have counter canter.  I won't need to really show a counter canter until next season and he should be done being proud of his new trick by then.

Do I have video of any of this?  Of course not!  I have a terrible jinx.   I got my video from my last show and was so excited!  It was a solid test and I had the whole thing on video!  But there's a problem.


See how it just stops at 2 minutes in?  Video was corrupted.  So much for getting my choreography finalized.  I'll have to try again after we get the large arena set up and I have my new phone.  My current phone has a crack over the camera lens, makes focusing tricky.  But you can see how nicely he trots now, like a grown up horse.  And he can leg yield without drama.  It's really a pity, the test improves as he settles into the ring and there's no canter work.  I guess I'll just have to try again.  Beauty like his should be shared.