I have a vice.  I'm sure it's one I share with a lot of people, but it's a bit of a problem because I share it with my horse.  We like to show off. 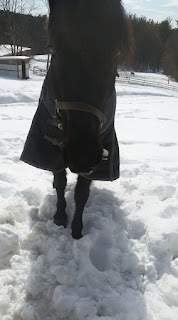 Saturday night I had a party (omg non-horse social life) so I had to ride early in the day.  I usually avoid this because there are a lot of lessons running on Saturday mornings, but I certainly wasn't going to give papi the day off after just getting him going again.  Due to helping some of the young and clueless in the barn, I ended up riding right in the highest traffic.  Four of the more advanced teenagers have a lesson together at 11am.  I mounted at 10:40am.  Timing, I do not have it.  I dodged nervous beginners and lunge line lessons for twenty minutes, then started doing my canter work while the teens were mounting and walking about.  It was the one break in the morning where I would have some room to work.

Theo wasn't paying enough attention in the chaos so I had him walk.  Didn't like the transition, so went back to canter and back down to walk.  Oh, nice, let's do that the other way.  Hm, traffic, might as well do a 10m circle and get him really sitting.  Canter canter canter walk.  Good boy!  And then I was just showing off.  Little canter leg yield to let someone pass, roll back style turn to change direction, a little counter canter, a flying change, you know.  Whatever.

Trainer A was giving me the eye so I settled down when the class got rolling.  But hey, it's fun to show off all of the things Theo has learned that none of the youngsters ever see.  It doesn't help that the sudden increase in traffic (and two, count 'em, two mares including Miss Thang) had a certain someone arching his neck and in full stud mode.  I had to keep him under wraps so he didn't upset any of the other horses.  Energy levels were high and there was some bucking and running about in the lesson without any help from me.  So I dropped my stirrups and went back to trotting.  Because, yes, showing off is a terrible vice and I posted trot with no stirrups just to show I could to a bunch of girls half my age.  Nope, not proud. I know the teens pretty well so when they started jumping, I parked Theo and spectated.  It was a great lesson for him to learn to deal with horses in his personal bubble.  He had horses jumping and cantering straight at him and he had to stand.  He occasionally pinned his ears, but generally ignored them and proceeded to nap.  Complete with a resting hind foot.

And when they were done?  It was Theo's turn.  We only jumped for about two minutes, but I couldn't deny him.  After watching everyone else go, I picked up his reins and he started trotting.  Clearly it was his turn.  So we cantered and popped over the bending lines, no problem, nailed our leads.  Because nothing says mature adult like showing off over 18" cross rails.