Poor papi.  We're having one of those weeks.

Saturday we had a jump lesson with my friend where Juicebox decided he needed to be a ridiculous little appy pony and we traded mounts.  She had a wonderful return to jumping with Theo's steady, straight forward style while I handled the pony that was clearly at his wits end with being told to go slow.  After we worked through the fact that I thought his temper tantrums were cute, not scary,  and would not make me take my leg off, we cantered around and jumped nicely.  It was a lot of fun and a serious change of pace for both of us.  So tiny!  I got ahead of him to one jump because I thought it was time to launch and he had a whole other step to put in.  Trainer A cracked up.  But no real time with papi, I handed him over within five minutes of the start of the lesson when Juicebox started bucking and trying to bolt. 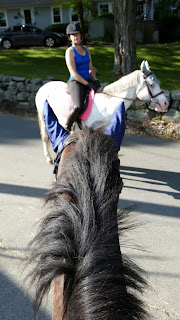 I need a new picture of Juicebox

Sunday I ran a 5k.  I visited to swap his blankets, give him a kiss and a cookie, then send him back out to his field. 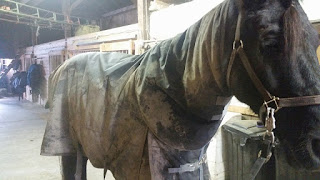 Pretty much the situation every day, all winter

Tuesday we had freezing rain and I couldn't get to the main road.  I texted Trainer A and missed another day with mi papi.

I saw him on Wednesday!  We had a nice lesson working on turn on the forehand, turn on the haunches, and our walk - canter - walk transitions.  After such hit and miss work he was tense in his poll but otherwise a role model of agreeable behavior.  Except when the smoke was coming out of his ears because we made him turn on the forehand while stretching his neck down, but he didn't offer to toss me so that's a good night. 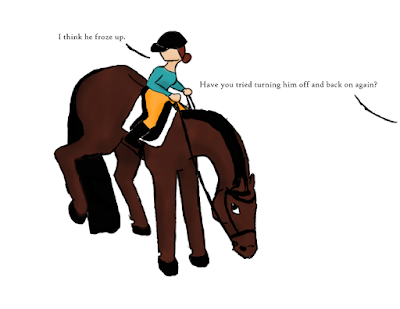 Today?  12" of snow and a snow emergency.  Not going anywhere. 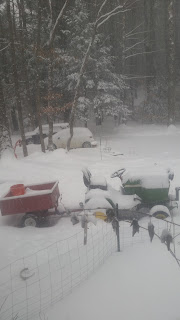 And so it begins

Tomorrow?  Not sure yet.  Depends on the temperature plunge.  If it's single digits, he'll be bumming around for another day.  Can't do much more than walk in that nonsense.  But the boss is out on Friday and my calendar is clear so I may try to sneak out in the afternoon and ride while I've got the chance.

Because this is my forecast. 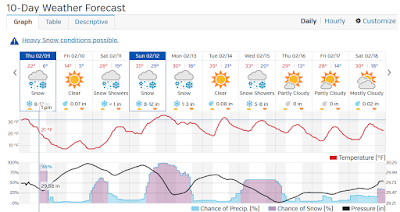