To answer my previous question, it was just my computer.  An add on that magically appeared on my browser.  They just keep getting more sneaky.

It's been a good run of rides with mi papi.  He's been marching along like a trooper and showing some real progress in terms of attitude and picking himself up.  I actually got to sit my canter instead of kicking and begging and cajoling him along with every step!  It's almost like he's suddenly discovered that he is, in fact, strong enough to canter on his own.

Today we had a bit of a tough lesson.  We went through the Intro C dressage test in the small dressage ring.  We would have been disqualified for leaving the ring, since he blew out through the left shoulder and zipped between the cones marking the ring edges.  It took several tries and some tough corrections to get the 20 meter canter circle to the right.  The light bulb did pop on (Trainer A said she actually saw the light bulb moment on his face) and he straightened up by the end.

Theo being Theo, though, I had to take a couple minutes and make up with him so he didn't continue to trot around the ring ticked off with me.  A cookie and telling him how smart he is got him back into his cooperative mind set instead of plotting my demise all around the ring.

We also started working on our straight halts by getting off the rail more.  Between the circles, the serpentines, and dodging the other horse in the ring, we were both feeling a bit off balance. 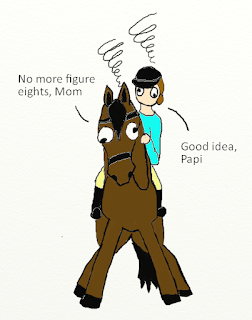 But the important bit is that his shoulders actually went where they belonged and he quit blowing through my outside leg.  Much easier to steer that way and less likely to get eliminated in the dressage phase!  Since I did drop off my entry for the first two phase of the season, that's kind of important.

I'm also beside myself excited that my jumping saddle has shipped!  I'm looking forward to not fighting my saddle to get out of the way while jumping.  I'll need it, since Theo does love to hop over stuff.  He did the barrels AND the scary plank on the first try this week.  Sunday is supposed to be our first solo trail ride, to work on his confidence.  I'm getting my jumping vest out of storage and dusting it off.  You know, just in case.
Posted by Catie at 2:16 PM