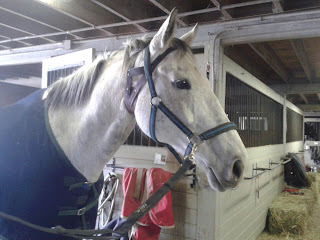 On Saturday, while I was absolutely freezing and couldn't feel my fingers, a trailer showed up with a big, grey gelding in it.  Just a week after the idea appeared, the Prelim level horse arrived.  I was in knots.  It's a big risk to take on a lease while owning another horse.  Sure, she's for sale, but we know how these things can go.  She could be for sale for years.  I signed up for a six month commitment to a second horse and my bank account is already screaming protests.

But no matter, I hustled out to get my first look at my new partner.  Tall, grey (hello Quicksilver), but he has a sweet face that you couldn't really see in his competition photos.  It was late enough that he was tucked into a stall and introductions to his new turn out group were delayed until the next morning.  I couldn't feel my fingers so I didn't even get a picture of him.  We got his food sorted out, went over last minute instructions, and left him to his own devices.  He paced a bit, but settled into eating quickly.  I had him in the stall next to the princess and she was making eyes at him.  She's such a flirt.

On Sunday I was at the barn at 7:30am to help introduce him to his new group.  I spent the next hour freezing, getting a sunburn, and watching as Ben decided that the bossy horses were annoying.  He walked off when the two bossy boys in the group tried to show how dominant they were, taking the school horse Red with him.  The two of them have already buddied up and spent most of the day eating or playing together.  I broke up the fun when I went to get Ben for his first real quality time with me. 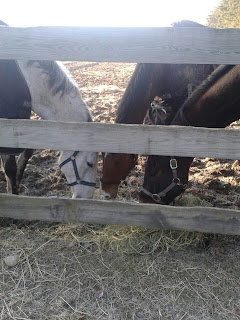 To be fair, Ben's been out of work for awhile.  He's a TB that was running Prelim into the fall of 2012, so he's still pretty fit.  But having said that, he was such a JERK on the cross-ties.  I couldn't leave him alone long enough to sweep up the hair, I had to put him in his stall before he got hurt trying to turn around on the cross-ties.  He had no issue with running into me or trying to drag me around while being led.  I sent his owner an agitated text, checking to see if he knew about cross-ties and if he was always this herd-bound.  She said that he was antsy when out of work and that I should put him to work and tell him to knock it off.

I snapped a chain shank on and took him into the indoor to have a talk about expectations for ground manners.  As soon as he realized that I was not to be ignored and that he had to work, he suddenly turned into a perfectly polite horse to handle.  We spent 20 minutes working in hand, then 20 minutes on the lunge line to let him get those bucks out.  He turned into a complete puppy dog, standing on the cross ties politely while I finished grooming and checked saddle fit (my jumping saddle fits!).  I was relieved, since his behavior was so naughty to start that I was ready to send him back.

So long as I had his blankets off, I snapped a picture. 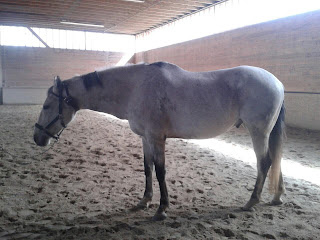 He looks like he's ready to take a nap.  And holy crap, look at those withers!  I'm lucky I've got a saddle that was picked out for a horse that looked just like him.  A cutback pommel is a life saver with these shark fin Thoroughbreds.  And right after this picture, he went and wallowed in the mud with his friends.  Of course.

And before anyone thinks I've forgotten her, the princess was also worked.  She's being a handful with spring and her first spring heat cycle.  Oh, the joys of mares.  You know spring is here when she suddenly decides that her flanks are not to be curried.  I didn't really give her a choice, though.  She's shedding at a ridiculous rate.  I thought she was just about done but noooooo.  Ankle deep pile of hair yet again today.  Where is it all coming from?  A TB mare has no business with that much hair.

Consistent work is keeping her under wraps and she's doing well.  We had a little incident where she threw a temper tantrum when she thought I was being rough and unfair.  I didn't necessarily agree, but as she was considering really acting up, I decided to try a different track and let her trot around with her head around her knees for about fifteen minutes before asking her to do much of anything.  I boggled her brain a bit when I asked her to do shoulder in, then a ten meter circle, then haunches in.  She did try, but decided I was out of my gourd.  We also tried her first shoulder in at the canter but she couldn't maintain the canter.  Not quite strong enough to do that move yet, so we'll have to keep working on her strength and endurance so that she can hold collection and really lift herself.  She did give me some lovely, balanced canters and one of her best transitions ever after the really intensive lateral work, so it's making a difference.  Her canter will always lag behind her trot, but it's improving.

Keeping both of these horses in work would be easier if Mother Nature would cooperate.  Another snow storm?  Really?  Where's the petition for this nonsense to stop?!
Posted by Catie at 7:40 AM