It's a universal truth for horse people:  compliment your horse and they will immediately prove you wrong.

We met our new instructor for the winter yesterday.  He's a nice guy and he asked about Fiona's history.  I said she was going Novice, but she's not jumping due to some serious issues.  I also said she's a doll to ride on the flat and very nice. 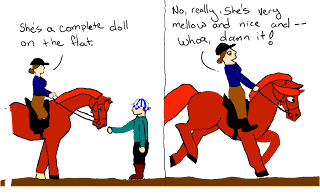 Right after I said that, Fiona decided to launch herself over a ground pole that happened to be in our way and take off like a bat out of hell, shaking her head all the way down the long side.  To be fair, she had two days off before that lesson so a sudden burst of energy wasn't all that surprising.  That doesn't change the fact that the instructor has dubbed her 'the firecracker'.  Sigh.

But he had some really interesting feedback on her, specifically about her lopsidedness.  She tends to hang on the left rein and disappear on the right.  I've focused on getting her off the left rein, he suggested that the actual solution was getting her to accept the right rein.  It was difficult and she did not particularly enjoy the matter being pushed, but she looked and felt really awesome after I held the right long enough for her to settle.  The lesson went really well and I think this instructor is going to get along with us well.

He did ask about the jumping, since he was really kind of smitten with her.  He kept stepping back and looking at her and saying 'she's so nice'.  I told him that she's got a major mental hang up on stadium and that I'm not planning to compete in eventing anymore.  He cocked his head to the side and said he likes these kind of horses.  He likes trying to figure out what's going on.  Then he asked if, in our private next week, he could see her jump just in case he sees something he knows.  I cautiously said yes, but with the understanding that I won't push her.  He's an entirely new viewpoint and I almost feel like it would be insulting him to refuse him the chance to even see her jump.  He also mentioned hopping on her himself, and I'm just too curious about what he would feel.

I won't jump her until that lesson and I'm going into it more as an interesting exercise than anything.  I am not changing my opinion on jumping her in competition, but I would like to find the cause enough to be able to do ground poles.  It's embarrassing when I have to carefully walk her over poles and guard against an explosion.

Was it a moment of weakness to agree?  Probably.  No, I'll be honest with myself, absolutely.  It just seems so harmless to let him see what I'm up against.  After all of the pros that have seen her and shrugged their shoulders, I doubt he'll see anything.  But I'll let him see the princess in action.