The good news is that all of these shenanigans mean that I've always got something to write about.  Two and a half years of posting, and I've still got commentary.

There's the usual horse stuff, like the fact the Princess has started shedding already.  It's kind of ridiculous when I'm driving through a winter advisory to get to the barn and I end up covered in hair.  She needs to look around while she's in turn out and realize that she still needs that hair and should leave it attached to her body.  Six inches of snow on the ground and I'm coughing up hair balls after grooming her.

Then there's the usual training stuff, like her dressage lesson on Monday.  Our dressage trainer is back for the winter so we're getting out butts kicked back into shape.  You know you've had a good dressage ride when your abs ache the next day.  Since the focus was on Fiona lifting her abs in order to engage her back, she was probably sharing in my pain.  Her junior rider commented on how nice and supple she was the next day.  We even got to use the 'c' word!  It's collection, guys, keep focused.  Yes, we started talking about getting Fiona to be truly collected and accepting of the aids.  I was so proud of her.

We also had to discuss the fact that I have a seat and it's useful for more than sitting on.  Who knew?

And then there's the special Fiona stuff, like our jumping lesson tonight.  And the fact that it actually went really well.

Damn it all to hell. 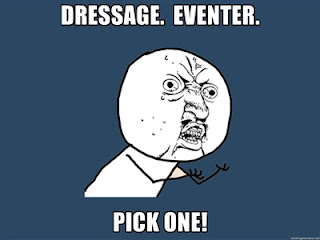 It wasn't like we did anything radical or new.  We did rearrange her gear a bit so she was jumping in a French link snaffle, a flash noseband, and a running martingale.  I also added a pair of ear plugs to take off the edge that she gets from hearing poles falling and other horses jumping.  Nice part is that my friends who participate in cowboy mounted shooting were able to give me a pair of earplugs to try and Fiona didn't mind them at all.

The winter trainer had the same general idea as my regular trainer, but slightly different application.  We focused on getting her up in front of my leg and then managing her behavior on the other side.  Fiona hesitated at the first ground pole, but the focus on getting her in front of my leg had her confidently going forward over the cross rails after that.  It was nice.  She really seemed to be happy and confident once we were rolling.  She was still exploding on landing, but it toned down with repetition and wasn't bad for her.  We did try some different things like settling her down by whoaing with just one rein.  That was hard to manage, I really struggled, but it did seem to keep her from feeling trapped.

The important part was that Fi seemed to be confident and forward.  She didn't look stressed, scared, or unhappy.  She enjoyed the lesson.  Damn it.

So now what?  I agreed that our next private jumping lesson would be another jumping lesson.  If she doesn't enjoy what we're doing, we'll stop.  There's no pressure, since I don't think of her as an eventer now, but so long as she's happily enjoying these cross rail lessons, I don't see any reason to stop.

I think my mare just likes to watch me twitch.  Time to switch to Cosmos.