Just my luck that the junior rider was in the tack when my favorite photographer was at an event.  However, these pictures are just too nice to not share. 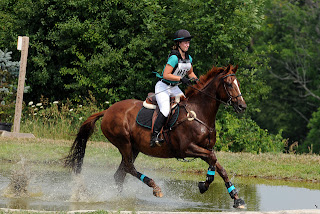 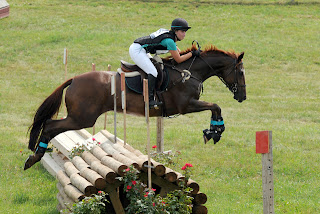 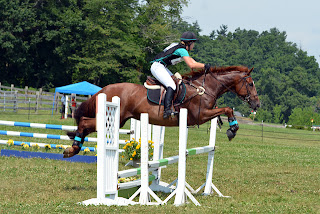 You know?  My mare looks really good in teal.  I didn't think she would, but it's a nice shade on her.  I'm sticking to royal blue myself, but I can admit that this is a good color as well.  You can't see it in the pictures, but she has a matching chain for her browband with silver and a type of sapphire jade that I found.  I even got a chain for dressage featuring some teal crystals for accents.  It only seems fair to not make the junior rider's outfit clash with my royal blue chains.  Ah, eventers and their colors.

Clearly Fi missed the memo that she was going Novice for this event.  Look carefully at the second picture.  There are three jumps in a row, and she's doing the middle one.   She's not actually jumping the training sized fence on the end.  I guess that settles the question on whether or not she's athletic enough for training.

This photographer will be at the Labor Day show as well, so hopefully there will be another pic spam featuring me in the saddle in the near future.