I have very deep thoughts during my long commute to and from the barn.

For example, I wonder sometimes what the moms sitting by the ring think when I'm riding.  I'm a bit of a chatter box and Fiona is very responsive to voice cues, so I usually have a running dialogue going with my mare.  It's part of making her happy to make it very clear when she's done something right, and she can accept a verbal correction more than a tap of the whip or any type of physical correction.  There's a sound that I picked up with dog training to use as a correction.  It's a kind of 'ahn ahn' sound that means 'no, don't do that'.  Fiona's figured out that 'ahn ahn' means 'no' and will usually accept that as a correction without getting overly upset about it.

But then there are the moms alongside the ring, watching their little ones learning how to post the trot, listening to me having a complete conversation with my mare.  And I know they have no idea why I was fussing over her and calling her a clever girl today.  She went from a trot to a walk, why is that such a big deal?  Heck, that's what the little kids are working on!

It's a big deal because I didn't do anything.  My hands didn't move.  We've been working on this since the last horse show and I think we're finally getting it.  If I sit tall, resist with my core and upper legs, she down shifts.  It's the start of a true half halt and being able to do a downward transition without her bracing against my hands or me hauling on her face.  It's been very hard, very slow going for both of us.  She's having to learn that little shifts in weight and different parts of my legs mean different things.  I'm having to be very, very conscious of how I move and make sure that I don't use my hands unintentionally.  If she braces, I have to take a breath and let go with my hands so I can try again.  It certainly makes for a happy, forward mare.  She's not as 'framed' as she is when I'm in her face, but she is moving better.  The 'frame' can come back later when we've got the basics fixed up.

But to the moms alongside the ring? I'm just that crazy lady that chatters away to her really pretty, really big horse that sometimes goes really fast and jumps things when the little kids are out of the ring.  Jimmy Wofford has a saying.  "The difference between good riding and bad riding is that you can't see good riding."  So I'll take it as a compliment that the moms have no idea what I'm doing out there.

In another bit of random rambling, I submitted a picture of me and the princess to Dressage Today for their photo clinic.  We'll see what the big dressage yuckity yucks think of my Craigslist find.  Pretty sure I'd be the first eventer in that column, not that you can tell from a picture of the dressage phase.  Sunday is our next attempt at a qualifying score at first level, so I'll be practicing slow, relaxed, zen thoughts for the rest of this week.  The husband thinks I should just do a shot of vodka before I head in.  It's kind of tempting.  It's also been suggested that I get lunged for an hour before our ride.  That might also work.  If I just keep going to dressage shows, I will eventually learn to not get freaked out by a judge staring at me.  They're not going to jump out of the judge's booth and attack us, even the princess has figured that out.  Her rider's just a bit slow on the uptake. 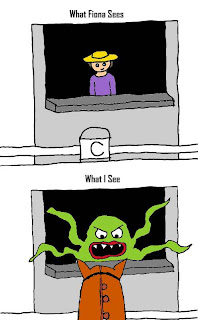 Fi went out and got another fourth place ribbon with her junior rider last week, this time at Novice.  Those two are getting along like peas in a pod, I think they're both having a lot of fun.  It's definitely been working out for the princess.  She's always up for attention and an adventure.  Rumor has it that they blast around cross country with both of them looking like it's Christmas morning.  I also heard that she did some training height jumping in her last lesson.  You go, girls.  They're heading out to Huntington and GMHA in August to do Novice before the junior rider is off to college.  I think Fi will be sad to see her go and be stuck with just one admirer again.  It's an awful lot of work keeping the princess happy.  Maybe I can find her another teenager to adopt . . .
Posted by Catie at 1:13 PM