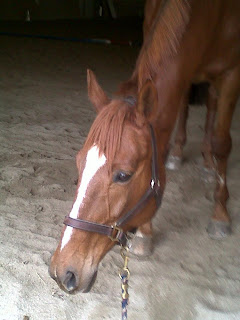 Dr. Fiona will see you now

Today was not a good day.

The first thing that happened this morning was that my work laptop started to act up. Nothing too shocking, but I needed to deal with it in order to get anything done. While deleting and reinstalling the offending software, my connection skipped and the install was botched. A second attempt just corrupted everything. Including my OS. At about 1pm I declared my laptop dead, as it could barely start up without the blue screen of death. It currently doesn't recognize my mouse or USB ports. It seems to think they are some sort of alien invaders.

At this point I started playing Tetris on my phone while waiting for tech support to call me back with an appointment to see my computer and probably reimage it. At 3pm I got sick of waiting and decided to go pick up a dressage saddle I had on hold to try. It was supposed to be a 30 minute drive.

Traffic was hellacious. Hellacious. I actually yelled at other cars. Scratch that, I screamed at one point. Over an hour of road rage later, I arrived. I picked up my saddle, covered it up to protect it from the rain, and spent another hour and a half inching to the barn. I tried it on the princess, it seemed to be a decent enough fit but not perfect. Believe it or not, it looked to be too narrow. On my TB mare. I took it for a test drive and my mare said no way. At this point my head was just throbbing. I yoinked off the dressage saddle, slapped on her bareback pad, and went back into the ring to work off a little steam for both of us.

Thanks, princess. I'll pick up a different saddle for you tomorrow.
Posted by Catie at 6:37 PM