Today was day 163 of Project Fiona.

It was definitely a day where I had to remind myself that it's the little things. Yes, technically, I'm working on the exact same things I was working on three months ago. Trotting nicely, bending, canter departs that don't frighten the other riders, jumping without major drama, etc. It's a bit heartbreaking when you think of it that way. I've been working for four months, what the heck do I have to show for it?

Well, for one, the canter depart is now about making it soft and round, rather than just getting it whatever way I can. We now have an overbend, so we're now working to keep her from popping out her shoulder and staying even in the reins. Instead of her getting behind the bit and jigging, we now have some lifting through the back so her hocks are engaging. We even did a canter from the walk transition, which was pretty darn exciting. I think she even surprised herself on that one.

No, we're not jumping more than twelve inches still, but I have hope. Our flat work gets better and better, some of that has to translate to the jumping. And it is getting better. She trotted in and cantered out over a line and listened to the balancing half halt in the middle. Sort of. We might have to bit up for jumping. I've got a mullen mouth pelham and a jointed kimberwicke in her size in case we have to start playing that game some more. I'm going to own so many bits, since neither of her snaffles are working out.

She got her teeth done, and it sounds like she really needed it. Time to start the bit hunt over again. We just used the hackamore for a couple days after her floating, since she probably hasn't been done in ages. She does love that hackamore, and the teenager that rode her was surprised how polite she is about things when she has that.

My trainer leaves for SC in just a couple weeks. I have a teenager that's going to be sharing Fiona with me while her horse is in training down south, so that should keep the princess happy. She's happiest when she has a lot of work and attention. And treats. Treats are important. I got a huge jug of treats at the holiday party, so she should be in a good mood for at least a couple weeks. So far she's been very level headed, but I'm not sure if that's due to her supplement changes or work load or what. Whatever it is, I don't want to mess it up.

Random, off topic drawing is random and off topic. 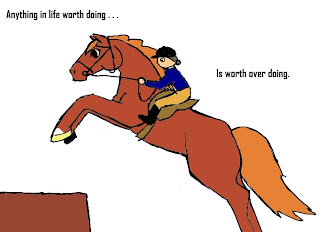