Okay, so Totilas she ain't, but I'm still surprised at how well the princess took to her dressage lesson last night. 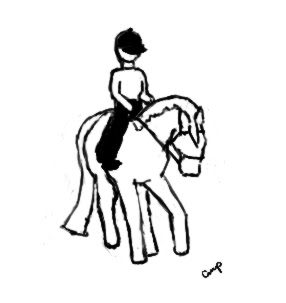 Everyone says the same thing about chestnut thoroughbred mares, and I was just waiting for the explosion while we ramped up the challenge level. It wasn't the pace or the movement, it was the amount of thinking Fiona had to do. You could see the wheels spinning while she processed these new requests. We worked a lot on the concept of 'threading'. I would thread one hind between the two front legs, then the other. Shifting her back and forth in what looks like a shoulder fore, but the emphasis is on the hind end. She chewed her bit, but I can't call it teeth grinding since I could hear her clicking in time to her work. That and she drooled everywhere. She clearly likes the Happy Mouth snaffle.

It was a surprise when instead of exploding, she just tried harder. Sure, she got frustrated and popped her head in the air when she didn't understand, but she was willing to push through it and keep offering. Our clinician complimented her on her movement, but more importantly, complimented her on her good brain. She is tense, but she tries her heart out. By the end of our hour, she was tracking up beautifully, even in the reins and working very hard at trotting with her hind legs under her.

Our canter work was just as alarming as ever, but I have renewed hope that it will improve as she gets strong enough to carry herself in balance. That, and our clinician managed to pinpoint a flaw in my position that I've been trying to locate. My lower back was locked in an exaggerated arch, probably a left over from my equitation days. It took a lot of different images and a lot of attempts, but it suddenly clicked and I sat down. Probably for the first time since I got back into riding. I recognized the sensation the second it happened. It's like being velcro'd to the saddle. She could pop her head and act up at the canter, and I sure as heck wasn't moving. More importantly, the princess approved of my softer position and started to round her back.

So, the princess can handle a mental challenge without a melt down. We have proof of this. She was pushed and she met the challenge. So what the heck is going on with our jumping? Is it really just a case of not being strong enough to handle her own body? I hope so.

The saddle fitter was out today, and both saddles passed. My jumping saddle was reflocked and the dressage saddle got a raised eyebrow because it's a bit clunky (Wintec), but I have the green light to use both. Since her back is looking better almost every day, I think we have the equipment issues under control. Thursday is a jumping lesson, we'll see if any of the dressage/hackamore/tack work makes a difference.
Posted by Catie at 7:01 PM