So foals, how does that work?

I hinted that Trainer Z and I were discussing a potentially cool upcoming project as it appears my neck is going to let me play for awhile longer.  We talked a couple times and now it's kind of becoming a thing.  For the first time in my life, I want to own a horse with a pedigree.  I want to know where they came from, who bred them, and what they were meant to be when they grew up.  I want to have baby pictures and watch someone look like they're flying a kite while getting the baby around a triangle.  And it's the perfect time since Theo would be around 23 by the time this theoretical baby was old enough to become my primary focus.

I'm going to buy a foal.

I still feel like screaming every time I say that.

I'm very lucky that Trainer Z is on board and this is far from her first rodeo.  She's got one due at the end of the month and her four year old stallion was born on her property.  And he's such a riot, he's turning into this total clown that loves to watch her working the other horses.  He will also peer in the window while she's using the wash stall, it's hilarious. 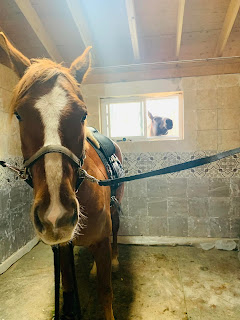 Just look at this weirdo

As much as I love her horses, her breeding program isn't for me.  Her horses are getting scooped up by people with grand, CDI type goals.  They need a lot of horse and I, frankly, have reached the point in my life where I don't need that much horse.  I need smaller gaits, not bigger.  And I want to be closer to the ground.  I'm tiny, damn it!

I wrote about what I want back in 2019 (before all hell broke loose) and it's more true now then when I wrote it.  I want short, sturdy, hairy, and fun.  I need enough power and brains to go up the levels but not so much I live in fear of what will happen.  And with my changed status, Trainer Z was ADAMANT that I not look at big, powerful, dressage bred WB.  As much as she'd enjoy having another fancy baby in the barn, she likes her client in one piece even more.  And I think she just likes the idea of having a fancy pony in her herd.  And we both immediately latched on to it being a stocky, native breed pony.  None of these mini-WB ponies.  Good feet, good brain, lots of self preservation.  Or, in her words:

So we're shopping.  She reaching out to her contacts, I've started reaching out to the few Welsh Cob breeders I know (Quillane and Castleberry, for those that are curious).  The plan is to find the right foal and to have Trainer Z manage the baby until they're safe enough for my AA butt.  Probably five or six years (because I'm still dumb enough to get on a five year old).  So a very nice start for the pony, growing up at a barn with their care and training supervised by a GP rider that's also a breeder.  And I can help with the ground stuff!  I have no restrictions on handling so I can get them ready to show in the breed ring or the DHSB stuff.

Now comes the hard part.  Picking a foal.  Especially as I've never done this.  Trainer Z is absolutely helping but she's got a business to run.  Some of the leg work has to fall on me, especially as we're diving into a breed she hasn't shopped for in the past.  I have Welsh cob pictures and pedigrees all over the place right now, trying to figure out what's going to work for us.  I didn't realize how hard it is to get a feel for the mares since they don't usually have under saddle pictures or even decent confirmation pictures.  My eyes aren't trained to understand a broodmare belly.

So for those that have done something crazy like this, how did you do it?  How did you pick the perfect one?  And what questions should I ask the breeders?  Because asking 'are your horses awesome?' doesn't seem very effective.