Theo has been with Trainer Z for a month now and it's going as well as I could've hoped.  I went up to visit this weekend (and drop off supplements, fly spray, detangler for his ridiculous hair, and a new saddle pad that I couldn't resist in the tack shop).  He is happy as a clam in his run in with a younger gelding to play with over the fence.  He's also managed to mow down the grass around his paddock for several feet and I really need to get pictures of the gymnastics he uses to reach just a bit more grass.  Shoulder in?  Much to hard.  Kneeling to get all of his neck under the fence and reach grass?  No problem. 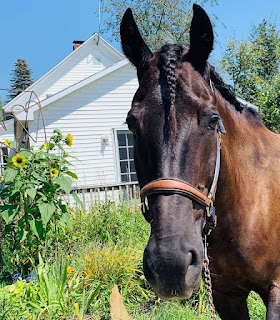 Hi mom!  They had to move part of the g

He's working 5 - 6 days a week.  Half the time on the lunge so Trainer Z can get him going forward, half the time under saddle.  Each week he looks a bit stronger and a bit more like his old self.  The stifle stumble is already gone and he's starting to offer more.  She even got to do a bit of shoulder in one day when he was feeling spicy.  He was tired quickly but he certainly remembers the fancy stuff.  As he gets stronger, he's offering more and more behaviors.

I had to laugh watching Trainer Z manage my beast.  He's 18, a bit of a school master, and knows how to have a negotiation.  Mount, sugar cube.  Start trotting like a western pleasure champion, cough three times, then start warming up like a dressage horse.  Once warm up is complete, walk, sugar cube, then he'll pick himself up for the real work.  Like he gets that sugar cube and immediately picks up his tummy.  He will NOT pick himself up until he's had a warm up, a walk, and a sugar cube.  That is the routine, so sayeth Theo.  Trainer Z has decided that it's definitely not a fight worth picking when he's so good about getting to work after his warm up.  He's just very set in his ways. 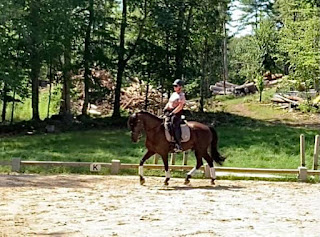 More potato vision but you get the idea

Full disclosure, the warm up habit is mine and I taught it to Theo.  I require 5 - 10 minutes of warm up before I can get to work, always have.  It takes that long to work through my various aches and pains and make my brain settle into the here and now.  At 18, Theo's got some stiffness to work through as well.  A clearly defined warm up is non-negotiable for either of us.

Most importantly, he looked happy.  The tail was swinging, the ears were soft, and the lip licking was pretty much constant.  There are issues with him trying to duck behind the contact as an evasion right now but that appears to be due to him getting tired quickly.  He's also crooked as the day is long but that's not exactly new.  It just hasn't been managed well for about a year.  His back is coming up and the dip in front of his withers is starting to fill in.  By spring, he should be back to being a very confident mid-level dressage horse.  He looks very comfortable now and is tracking up beautifully.  Canter is a bit lateral but we've got to have him near PSG fit to get that canter really clean.  Right now, it's all about muscle building and endurance. 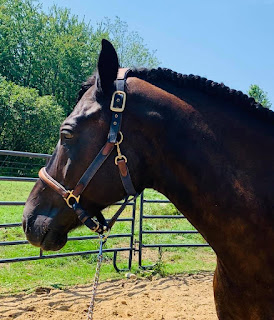 All braided up with nowhere to go

Since he's behaved himself, only busted loose on the lunge line once (caught Trainer Z off guard, he got a firm reminder on his manners afterward and didn't try it again), and has kept his protests below the level of the toddler stallions he lives with, he gets to stay indefinitely.  This is a huge relief to me.  Come spring when he's fit and ready to show off his tricks again, Trainer Z expects it will be easy to find him a leaser.  Just have to find someone with a sense of humor and pockets for sugar cubes.  He'll remain under Trainer Z's watchful eye hopefully until he's ready to fully retire and be a pasture potato.  He's had a lot of change in the last two years and I think it's time for him to settle in and have some consistency again.

He's started nickering for Trainer Z when it's his turn to be worked.  Apparently he was very sullen and pouted when he had his ride time moved and thought he was skipped.  I think he's missed being a show pony.