Riding the beast you made

Well hello there, it's been awhile. 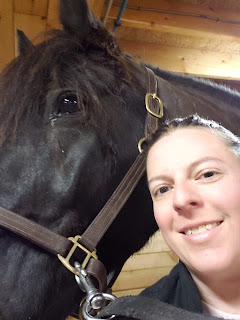 After my lesson with Trainer Z, we had an ice storm.  Whelp, day off for Theo.  Then I tried to ride him on New Year's Eve and instead we ended up cowering in the arena while ice and snow fell off the roof for about 20 minutes straight.  Thank goodness I'd planned on lunging so I wasn't sitting on him when it started.  It sounded like constant thunder right over our heads and things were falling by the windows.  I gave up (poor Theo was shaking, it was so bad) and warned Trainer D to lunge him before his Wednesday training ride.

I flew home to Minnesota to surprise my mom for her birthday and while I was there, my brother so kindly gave me an upper respiratory infection.  I flew back and then spent a couple days doing nothing but keeping the couch from flying away while my lungs tried to leave my body via hacking coughing fits.  Disgusting.  Trainer D was kind enough to keep Theo in work while all this was going on and he even gave the barn manager a jumping lesson.  He was a saint. 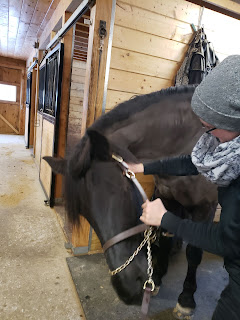 Also got a massage, lucky pony

I finally made it back to the saddle on Friday after over a week off.  It was a jumping lesson and I had to keep stopping because I couldn't freaking breathe.  Theo was a good packer pony and added strides as needed to keep me safely on top.  I was like a sack of potatoes with overcooked noodles for legs.  We did nothing more technical than a four stride line.

Trainer Z returned yesterday (Sunday) and I was dreading my lesson.  I'd barely been able to ride and Theo was very snorty and wide eyed with our crazy windy weather.  Everyone was telling me how sassy and wound up all the horses were being.  I went into the arena like someone facing a firing squad.  Trainer Z is a nice trainer but she does not suffer fools gladly and I was feeling very foolish.

We decided to work on canter but not flying changes.  He's got the idea, time to focus on something else and not set off Theo's winter brain.  I got read the riot act on my newly found contact problems in the canter.  Theo's dramatics have led to me giving up the contact completely in an attempt to keep him from losing his mind.  So he flails and guesses at what I want, which makes me give it up more in an attempt to keep him chill.  Trainer Z spent probably 20 minutes getting us to canter forward on a straight line down the quarter line.  My contact was all loosey goosey and he was hanging out behind my leg badly.

We couldn't do a freaking collected canter around the ring.  It was both embarrassing and enlightening. 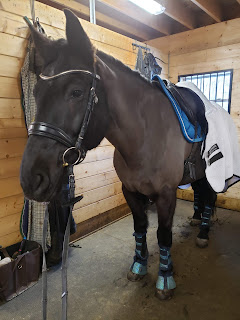 My glitter boots, however, are not embarrassing.

Even without trying we got probably a dozen clean changes so it seems he has the mechanics figured out.  Now we can do something else with our time.  Like getting him back in front of my leg and back in the bridle.  I had managed to wrap myself up in so many knots that I was trying to touch nothing to prevent the bucking and jumping about behavior.  Nope, that's not how that works.  Kick him up into the bridle and show him what I want.  I can't spend years making him strong, fit, and sensitive only to quit riding when he gets frazzled.  I made a mid-level dressage horse, now I need to ride it.

We did get our forward, straight canter back and that felt fantastic.  We also got what I dare say was our first two steps of a more than medium trot while he was still wound up from the canter work.  I had him trotting as big as he could and I asked for a bit more and this other gear showed up for a split second.  Like I felt his back shift as he ate up more ground and Trainer Z started cheering.  I don't think even Theo knew he could do that as he had to shorten up again almost immediately but he was quite proud of himself and ready to do it again.  I stuffed him full of sugar.

Theo has managed to land in the role of schoolmaster which is crazy considering he is learning along with me.  Trainer Z has said a couple times now that he's just like teaching on a school master.  I get it right, I get a nice movement.  I screw up, he does something else.  I keep worrying about ruining him but the reality is that he's getting this faster than me.  He learns it, then waits for me to catch up.

I'm under strict orders to refocus on the fundamentals for two weeks and fix our contact problems.  I'm also on the market for a new saddle as it appears I'm moving past what my current saddle can help me with.  The more I sit, the more Trainer Z thinks my saddle is fighting my short thigh confirmation.  So joy and bliss, I'm going back on the saddle market.