Some things improve with age. 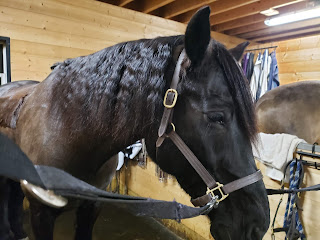 Theo's about to turn 16.  I gave him Jan 1 as his birthday since no one knows what his actual birthday is.  Something about that age makes his years feel more real to me.  Probably because that was Allen's age when we started showing together.  It pulls at the little threads of dread about a horse starting to approach retirement.  He's not a youngster, or even a horse at his physical peak.  He's a bit older, a bit arthritic.  There are white hairs coming in across his forehead.  It takes a bit longer to warm him up.  There's a clock ticking but I don't know how much time I actually have left.  Being in a h/j barn, most horses his age are the steady schoolies.  The old men.  The ones stepping down from competition.

I don't like this at all.  I was just learning to rock with my Hellbeast when his navicular got the best of him and he retired.  He had just turned 19.

But Theo's not like the school horses that are stepping down.  Little punk almost got me off today and it wasn't even a temper tantrum.  We jumped a little cross rail to get him mentally engaged in his dressage school.  He landed on the wrong lead so I asked for a flying change.  According to witnesses, he over did it behind, lost his balance, and tangled up in his own legs.  So he jumped up and out of it.  For about four strides, it was up and down chaos.  He went back to counter canter and then popped a clean change because clearly it was easier to just start over.  I was happy to still be on top when the dust cleared. 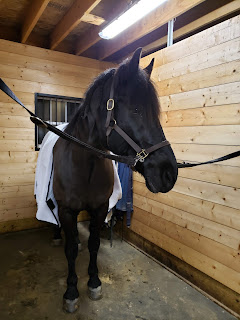 I can't complain.  He was trying too hard and getting in his own way by changing behind before the front.  Apparently he took my correction to get more active behind to heart.  That's straightforward enough to fix, he just needs miles.  It's actually on the aids now so that's a huge win.  My friend was riding her fancy Legs mare and commented on his very (overly) enthusiastic hind end.  I think there was a bit of envy.  Her mare is in her prime, but she also took off with her this week and then was almost unrideable yesterday.  Theo, in contrast, was trotting on the buckle between exercises even with the rain pouring on the roof and her mare broncing on the lunge.  I ask, he tries his heart out, and then we stop for a cookie.  Yes, he occasionally spooks or pulls a land porpoise but it's all honest and straightforward.

The horse I rode today was a much better horse than the eleven year old I met.  His action behind was better, he was stronger, he was more sensitive, and he was more balanced.  He's also more interactive, more trusting, and far more willing to try.  He's my little sports car with all the buttons and options.

There's not much I can do to stop the march of time.  Every horse owner I know wishes that they could keep their horse in stasis so they don't keep aging.  As a dressage horse, Theo is very much in the golden window where he is mentally mature and his body is still very able.  Now I have to keep him in that golden window for as long as I can.
Posted by Catie at 9:43 AM