Good gravy, it's that time of year again. 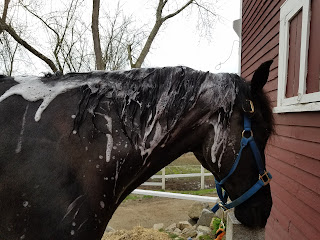 I spent several hours this weekend trying to make Theo look presentable.  That meant shaving his legs (plenty of us know how that first leg shaving of the spring goes), giving him a bath, and whacking back his ridiculous chestnuts.

Is this a draft thing?  His chestnuts are massive, like additional hooves growing on the sides of his legs.  They don't peel off nicely, I have to use hoof nippers and shears to cut them off.  In the winter they're buried in hair and I don't bother.  Come spring?  It's a massive project to get his chestnuts and ergots trimmed down so he looks like a modern horse and not a throw back to something prehistoric.

Today was a vet visit to get Coggins, rabies, EHV, Potomac, and health certificate for our first out of state road trip.  We also got a box of Adequan.  There's still a lingering thing that I feel in the right lead counter canter and sometimes in the right lead 10m circles.  It's minor, but I'm big on maintenance and making sure nothing is bothering my partner.  Chiro adjusted him last week and his SI on that side is always trying to act up, so we both think it's an SI issue.  Quarterly chiro appointments keep that from becoming a serious issue (gotten to the point the chiro can do him in 10 minutes), time to back it up with some Adequan and bi-weekly massages.  After talking to the vet, the plan is to do SI, stifles, and hocks all in July during his summer break.  I want to see how he responds to Adequan first.

Unfortunately, due to a scheduling failure, Theo lapsed on his Coggins and rabies and everything else.  This means we can't go anywhere until the Coggins is back from the lab in a week or two since he's been without a current Coggins for a month.  I also can't get my health certificate until the hard copy is back from the lab, so my May 10 show is in danger.  I'm still grinding my teeth over this.  In all my years of horse ownership, this is the first time that a barn didn't schedule spring shots on time.  It's kind of a big deal to have all of the horses current on things  When I called to ask about the date for my own scheduling back in March, I got a run around about the vet not being available.  I point blank asked the vet and the appointment wasn't scheduled until I called asking about the date.  Great.

Also found out that my horse has apparently been pawing at the fence and this time got stuck, tore off a shoe, and came in with a swollen ankle.  Thank goodness the vet was here.  He said it's fine, no soft tissue injury or anything, just a bit puffy due to yanking on himself.  I'm sitting in the barn office waiting to hear the status of the farrier and the fence being repaired (and listening to the fiasco where the old Coggins can't be found for some horses so they're calling boarders).  Theo on stall rest is my least favorite thing, but I can't put him out with the fence damaged like that. 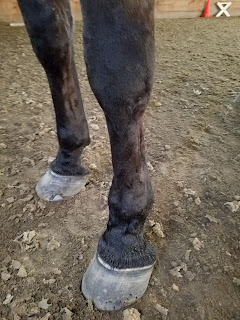 Hopefully the paperwork will be sorted by May 4th.  That is supposed to be an off property jumping school.  It's going to be our only chance to get off property before the shows start. May 10th, assuming we have a health certificate, we are off to show western dressage for two days at a venue he hasn't seen before.  At an Arabian breed show.  With our move up tests.  I have zero expectations for that outing, it'll be all about survival.
It's going to be a long show season, so I'm trying to not get too grumpy.  Getting a late start isn't the worst thing.  Just grumpy that I have to twiddle my thumbs for a few weeks.