I'm a slow learner.  Repetition helps with that. 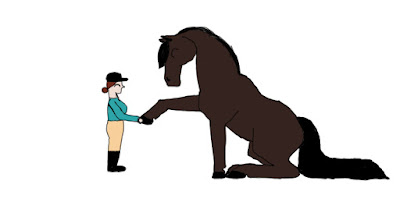 Theo was just awesome today.  Awesome-sauce kind of awesome.  Apparently a return to lateral work was what his left lead canter needed because it was much improved.  We started out with some halt walk transitions, getting him to move off a light aid.  Then we did some leg yields off of quarter line, really focusing on him staying balanced.  We had a stubborn moment in the outdoor because mi papi clearly doesn't have to listen to the leg or go forward in the outdoor, but once we pushed through that, we had lovely, very soft work in both directions including that left lead canter.  I'm suspicious his left hip (the stronger one, damn it) was tight and he needed to stretch it out.

Then we went on a trail ride.  A walking on the buckle trail ride.  We did have to spook at the new construction zone, but he touched the big Bobcat attachment with only a little shaking in terror.  Most of our hack went exactly like this.


So why is it suddenly so good?  Why am I not icing my shoulder or crying or panicking?  Partially he's done being dumb for fall.  Partially we've pushed through the wall on the whole flex thing and it's no longer a big deal to him or something he wants to fight me on (at least most of the time).  Partially I'm back out there on a regular schedule, getting him back in his routine with the exercise and attention he demands.

But mostly it's because I decided that this hobby is too expensive and dangerous for it to suck.

I fell into the old trap of forcing him to submit.  I don't like that part of me.  I didn't even recognize that it was happening until I looked back.  I was so frustrated that I couldn't MAKE him behave the way I wanted, the way that was expected of me. 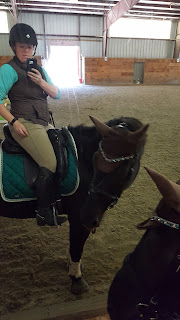 All blinged out and nowhere to go

If my shoulders hurt, stop doing whatever the hell we're doing, walk on a long rein, and figure out what the hell has gone wrong (unless we're going cross country, then all bets are off).  In exchange, mi papi doesn't try to kill me.


Let's start with that and see if that's what I need.  The nice part about having a hurt shoulder is that it will make a great barometer.
Posted by Catie at 7:09 PM