That's what I'm calling Fiona's trial, an extended sleepover.  She's still mine, but she's just staying over at a friend's place.

I dropped Fi off at UNH today.  I have been to the facility a lot of times, but it was my first time going into the barn. It was big, orderly, and very airy.  I was impressed and very comfortable dropping my girl off.  Of course the Princess didn't mind trailering by herself or going into a new barn.  What she did mind was the deep bedding in the big stall that was waiting for her.  It was a finer type of shavings than she's used to and at least fetlock deep.  She stopped, snorted, and wouldn't move for about thirty seconds while she stared at the bedding.  After that, she dug into her hay and just watched the world go by, already settled in. 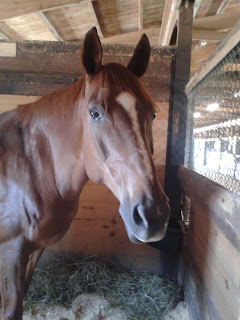 Tomorrow, her trial will start.  I'm not sure what the plan is, but I've dropped off everything they'll need for her except for a saddle and a girth.  We'll see what she thinks of being a teacher and we'll see if UNH likes her quirky little self.

Part of me wants her to do really well and find her forever home, but I'll admit, part of me wishes she could just come home again and be my princess.  Leaving her there was much harder than I thought it would be.  But the bright side is that whatever happens next, Fi will have a safe place to call home.
Posted by Catie at 11:01 AM