Houston, we've got a problem

It actually took me a couple days to write this up.  Emotions can be such a nuisance.

On Monday, Fiona and I went out to the Scarlet Apple Horse Trials, a schooling show sponsored by my barn and held at Scarlet Hill Farm.  The princess has been to this facility many times, both for schooling and for events.  It's an absolutely gorgeous facility and has the kind of cross country course than many sanctioned events wish they had.  Big hills and well built jumps from elementary to preliminary. 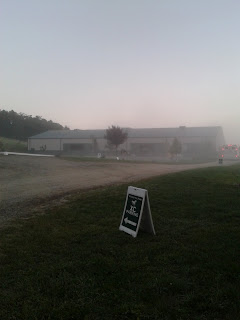 Since Fi was sick, we entered at Novice.  With the stadium and cross country untimed, I figured this would be a nice, quiet day out and a confidence booster for the both of us.  Our dressage was the best we've done to date, scoring a 30.9.  It was calm and accurate.  A little more forward and we might even rival Dorkzilla one day. 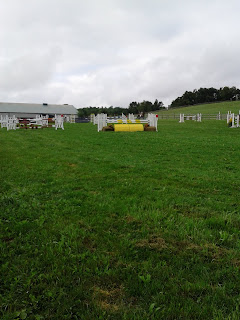 Something just went horribly wrong.  I jumped three fences in the warm up and they went well.  I did knock a rail on that last oxer before going in, but Fiona seemed calm and with me.  She lit up in the arena, but that's normal.  She hit a rail on the first fence, but then at the second?  She stopped dead.  I represented, and she stopped again.  Stopped a third time.  It took four tries to get her over.  We made it over fences 3, 4, 5, 6, and 7, but 8 was a two stride and she quit on me again.  I raised my hand and retired.  I was badly rattled, but my trainer wanted me to go on to cross country since that's Fi's strength.  Since we weren't dangerous, we were given the go-ahead.

Fence 1 was okay.  Fence 2 she took off long and I was left behind a bit.  Fence 3, 4, 5, and 6 all had stops.  7 and 8 were fine, but when she stopped at 9, I retired.  We could not find a groove and the mare was not happy.  Our gallops between fences were rough and her approaches were frantic.  Neither of us were enjoying ourselves and we went back to the trailer.  I was absolutely devastated.  It didn't help that everyone had seen Fi with her junior rider tearing around at Novice just a month ago at the same site and kept bringing that up.

So what the heck happened?  No one knows.  She's not lame or acting sore anywhere (she got an 8 in her canter in the dressage), her warm up fences were nice.  It's like hitting the rail rattled her, and then her confidence just left when stadium got rough.  Fiona usually drags me over fences, not the other way around.

I'm giving her the benefit of the doubt and having the vet out to check her over.  A physical explanation would make sense when the mare that doesn't have a stop in her suddenly won't jump anything.  If the vet can't find anything, we'll move on to the next most likely answer:  Fi has lost her nerve.  She has always had very fragile confidence and the time off may have affected her more than we thought.

For now she's only working on the flat.  Once the vet has seen her, we'll figure out future plans.  Of course, GMHA is less than two weeks away, so there's a big question mark around that event.  Will we go?  Will we move down to BN?  Right now, I don't know.

I just keep reminding myself, we have to experience the lows to appreciate the highs.  Because this is a pretty lousy low.