Helmets don't go on sale most of the time so I've been biding my time, waiting for that magical weekend in September where everything goes on sale.  The weekend arrived and I had a bunch of credit from consignment sales built up at the local tack shop.  So I snagged myself a Trauma Void for $100.  Win! 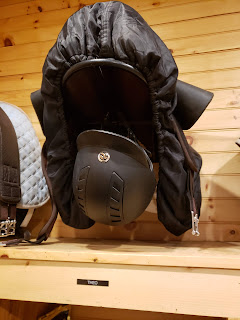 My trusty Charles Owen was retired after 4.5 years of service.  My new Trauma Void has taken over as the helmet I have hung up in the tack room.

I've only had it for about 6 hours but so far I like it.  The fit is more oval than my Charles Owen but it's comfortable.  I got a 59cm and I wear a 7 1/8 with the ChOwen.  It doesn't move at all when I ride in it and is nicely ventilated.  Theo was being a bit of a sassy puke so I didn't even notice the new helmet for the most part.  That's a good thing.  No random headaches are pressure points after riding for an hour and sweating like crazy.  My horse is such a puke this time of year!

The chin strap is stupid long.  Yes, I like mine snugger than most people but come on.  I have it almost as small as I can get it with the padded part and the little clip is starting to creep under my chin.  Probably not a problem for most people, I think I'm oddly shaped, but I'll have to cut the excess. 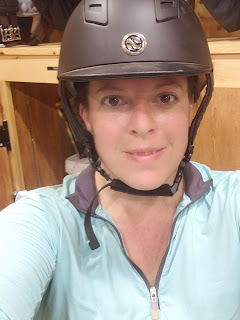 I also got a vest, some new breeches, a bunch of treats, I really shouldn't be allowed in tack stores.  But I managed to put down all of the stock ties because I already have two on the way from Stockbubble.  My trainer will not be amused at the next show.
Posted by Catie at 5:56 PM