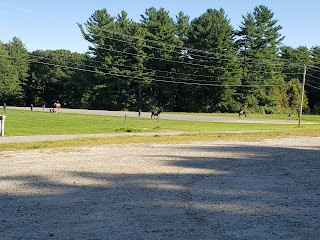 Theo was uncertain about this.  Probably because the trailer next to us had a herd bound horse screaming her fool head off and crashing around.  Poor papi was certain I'd brought him to a very bad place. 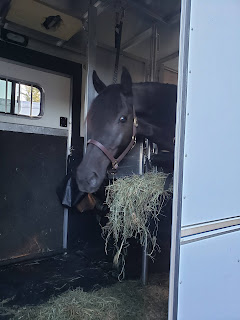 Where have you brought me?!

Trainer Z was in residence and helped us warm up for two nice tests.  The first one was very solid and I, dare I say, had fun riding it.  I even smiled.  It's starting to feel confident and secure so I can ride with less anxiety and a lot more enjoyment.  That test got us a 64% from a judge that's known for not playing nice just because it's a schooling show, so I'm very happy. 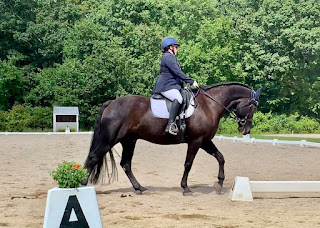 Our second test was my first attempt at Second 2.  I thought it would be a better test for us since there's more movements where we can pick up points without having stunning gaits.  All those simple changes, the turn on the haunches, etc.  And I was right.  Even though Theo and I were both dragging a bit when we went back in (4.5 on a medium OUCH), we got another 64%.  My shakier riding and Theo's smaller gaits were balanced by 7's for turns on the haunches and simple changes.  Did have a bit of trouble with that medium down centerline at the end.  Theo tried to drop the landing gear at X while still in medium trot.  I laughed, the judge laughed, Theo thought I was lost and possibly drunk.  We halt at X, these are the rules! 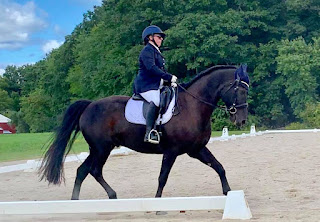 This also got us the high point for Second level.  Yes, I was the only rider in both of my classes (Trainer Z was on a greenie in Second 3 as the only other Second level rider), but I picked up the ribbons anyway because dang it, I have moved up to Second and those are personal best results! 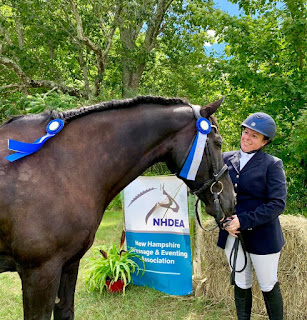 He's sticking his tongue out, my horse show photo album is complete

I really don't see a lot of two test shows in our future.  Sitting his collected trot is exhausting for me and being a big, powerful, collected horse is exhausting for him.  By the time he's appropriately warmed up so we get the best test, we've been working for forty minutes and there isn't a second warm up and test in us.  The second test went fine, but about half way through Trainer Z said she could see me basically stop riding.  My abs gave out.  Especially with our forecasted move to Third next summer, we'll stop signing up for two tests in a day.  It's just not going to be a thing.

This was a great outing for us and a confidence builder.  No explosions in the canter departs, improving mediums, all around the exact outing we need right now.

Most importantly this qualifies us for the year end awards through our GMO.  Yay, satin!
Posted by Catie at 8:54 PM